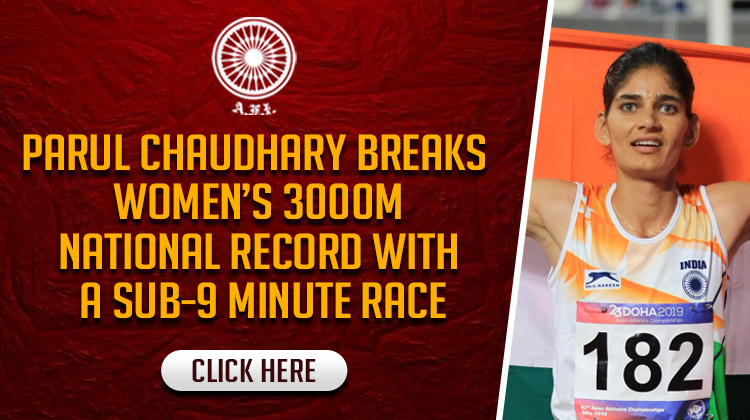 New Delhi, July 3: Parul Chaudhary became the first Indian runner to clock a sub-9 minute time in the women’s 3000m when she rewrote the National Record with a time of 8:57.19 in the Sound Running Sunset Tour #1 in the Jack Kemp Stadium in Los Angeles on Saturday as part of her preparations for the World Athletics Championships to be held from July 15.

Parul Chaudhary, training in Colarado Springs in the past fortnight, broke Loganathan Suriya’s mark set of 9:04.5 (hand-timed) in the Indian Grand Prix 1 in New Delhi on April 24, 2016. Her time was easily the best produced by an Indian woman in overseas conditions, lowering the 9:06.42 clocked by Molly Chacko in the Asian Games in Hiroshima in 1994.

The 27-year-old, who will compete in the 3000m Steeplechase in the World Championships, was running her maiden two-mile race, not often contested by Indian women runners except in age-group competition. She stayed calm despite bringing up the rear in sixth place after 1000m and fifth with two laps to go. She made a move on the penultimate lap and finished third behind Chinese runner Wuga He and Fioana O’Keefe (US).

Ranked World No. 48 in the Steeplechase, Parul Chaudhary qualified on the strength of her world ranking. She is 39th among the 45 women who will come under the starter’s orders in the World Championships on July 16. She missed out on qualifying for the Tokyo Olympic Games last year by a single spot on the ranking.