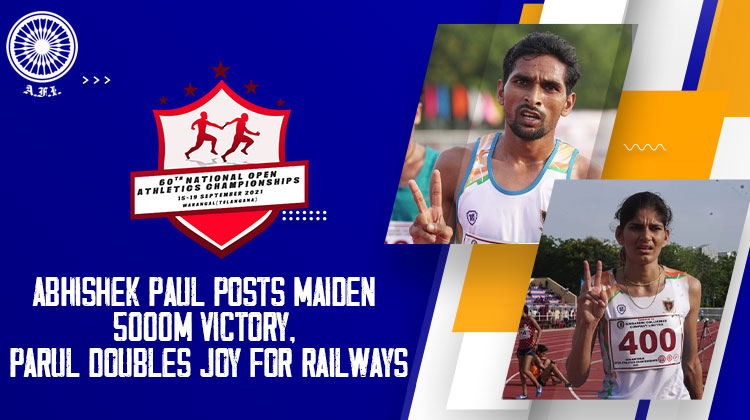 With the Federation Cup 5000m winner Amit Jangir not starting on Wednesday, the race was always going to be a contest between Railways’ 24-year-old Abhishek Paul and the Services trio. He used smart race tactics to emerge a winner for the first time in a 5000m race in a National competition.

Abhishek Pal was content to run most of the race in third place, shifting gears with 300m left. His powerful strides brooked no response from the erstwhile leader Dharmender. Kartik Kumar, who won the 5000m in the Inter-State Championships in June, tried to use the Railways runner’s pace but realised that Ajay Kumar had enough energy left to claim the bronze medal.

Parul Chaudhary also played the waiting game, settling behind leader Komal Chandrakant Jagdale for a large part of the race and striding ahead with just over 250m left in the 12-and-a-half-lap event. The 22-year-old Maharashtra runner, who did not find the speed to keep Parul Chaudhary at bay or to challenge her on the home stretch, took silver with a personal best time.

Another Maharashtra runner, Sanjivani Babar Jadhav, taking only her third start in a national-level long distance race, was in the mix till the halfway stage but found it tough to keep pace with the two leaders and claimed the bronze medal well ahead of Chinta Yadav, the second runner in Railways colours.

In the women’s Pole Vault, Tamil Nadu’s Pavithra Venkatesh topped the contest, clearing the bar at 3.90m while Railways’ Mariya Jaison and Krishna Rachan took silver and bronze with clearances at 3.80m and 3.70m. Rosy Meena Paulraj (Tamil Nadu) missed out on the bronze on countback.

Services’ Muhammed Ajmal, stepping up from the shorter sprints to the quartermile, clocked 47.08 seconds to be the fastest of the eight qualifiers for the final. Ayush Dabas (Haryana) won his heats with a time of 47.24. In the absence of many familiar names, seven of the men’s 400m qualifiers for the final were credited with sub-48 seconds efforts.

Andhra Pradesh’s Dandi Jyothika Sri was the fastest qualifier for the women’s 400m final, clocking 54.83 seconds. Haryana’s Kavita, competing on the national stage after a gap, was the second fastest with 55.14 seconds on day when Olympian V Revathi (Railways) did not start and familiar names like Summy (Haryana) and Soniya Baishya (Railways) did not qualify.

VK Elakkiadasan (Railways) and K Naresh Kumar (Andhra Pradesh) were the fastest qualifiers for the men’s 100m finals winning their heats in 10.52 seconds and 10.54 seconds respectively. Harjit Singh (Services) and Amlan Borgohain (Assam) were the other sprinters who dipped in under 10.60 seconds on their way to the final.

In the women’s 100m heats, Delhi’s Taranjeet Kaur broke the beam in 11.70 seconds, beating Archana Suseendran (Tamil Nadu) and Himashree Roy (Railways) to the second and third places. In the other heats, Nithya Gandhe (Telangana) got home in 11.90 seconds to beat the fancied C Kanimozhi (Railways) to second place.