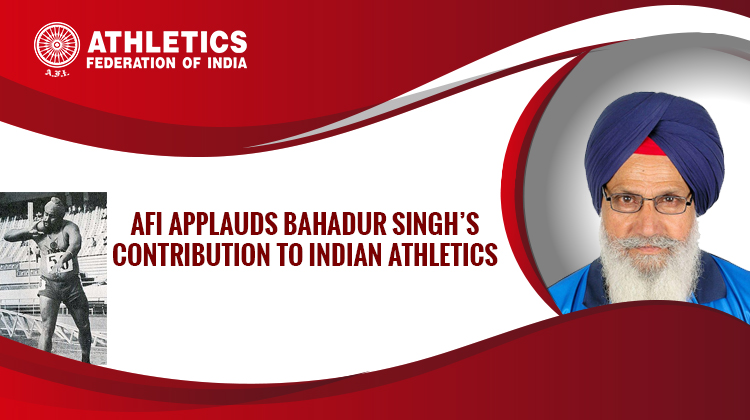 NEW DELHI: Athletics Federation of India has placed on record its acknowledgement appreciation for Bahadur Singh who resigned as National Chief Coach after 25 years of distinguished service.

“As we stay focused on our journey to being counted on the world stage, we will always remember the immense contribution Bahadur Singh made to Indian athletics, first as a shot putter of repute in the 70s and early 80s, and then as Chief Coach since February 1995,” AFI President Adille J. Sumariwalla said.

“We would have loved to see him helm the squad in the Olympic Games, but the COVID-19 outbreak forced the postponement of Tokyo 2020. He resigned in the wake of the Ministry of Home Affairs advisory restricting movement of senior citizens. We will continue to draw on his experience in planning and in monitoring training and coaching,” Mr. Sumraiwalla said.

Under his stewardship, India did admirably in the Commonwealth Games 2010 Delhi when it won a dozen athletics medals, including two gold. The 1946-born Bahadur Singh’s finest moment as Chief Coach came in Jakarta in 2018 when India won 20 medals in track and field competition, including eight gold and nine silver.

“The country’s best showing in Asian Games athletics instilled a belief in the community that with a bit more planning and effort, India could raise the bar and make a mark on the global stage. And Bahadur ji contributed to this rise.”  AFI Planning and Coaching Committee Chairman Dr. Lalit K. Bhanot said.

He also applauded Bahadur Singh’s role in actualising the vision of the Federation. “He readily accepted the challenges placed before him by AFI, buying into new ideas with an open mind. Combined with his calm approach, these qualities made Bahadur ji a very successful Chief Coach,” he said.

He also competed in the Moscow Olympics in 1980. Bahadur Singh was given the Arjuna Award in 1976 and the Dronacharya Award in 1998. He was conferred the Padma Shri in 1983. AFI remains committed to the collective dream of upgrading India from being a force to reckon with at the continental level.