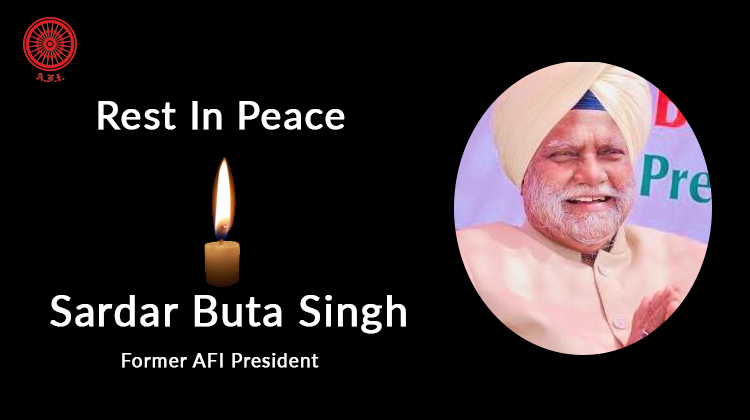 AFI President Adille J. Sumariwalla said the athletics fraternity had lost a visionary in Sardar Buta Singh’s death. “I was an active athlete when Sardar Buta Singh was AAFI President and can say that he was a fine leader, setting the sport on the right path and dealing with athletes firmly and politely,” he said.

“Anyone who knows Indian athletics history will concede that the 1982 Asian Games were a huge milestone and a turning point. The concept of National Camps underwent a sea change when Sardar Buta Singh was AAFI President, with the athletes being trained on Patiala for long spells, unlike the past when the duration of a camp would range from a fortnight to a month,” he said.

India picked up 21 medals, including four gold and nine silver, in the 1982 Asian Games held in New Delhi, easily the biggest haul since the inaugural edition in 1951. “A lot of that success was due to the vision of Sardar Buta Singh who empowered the likes of Chief Coach JS Saini to groom a number of athletes to succeed on the big stage,” he said.

Sardar Buta Singh was President of AAFI (as AFI was known then) from 1976 to 1984, facilitating India’s fine performance in the New Delhi Asian Games in 1982. He was Chairman of the Special Organising Committee of the 1982 Asian Games and the Vice President of Asian Athletics Association in 1979. He was Minister of Sports from 1983-84.