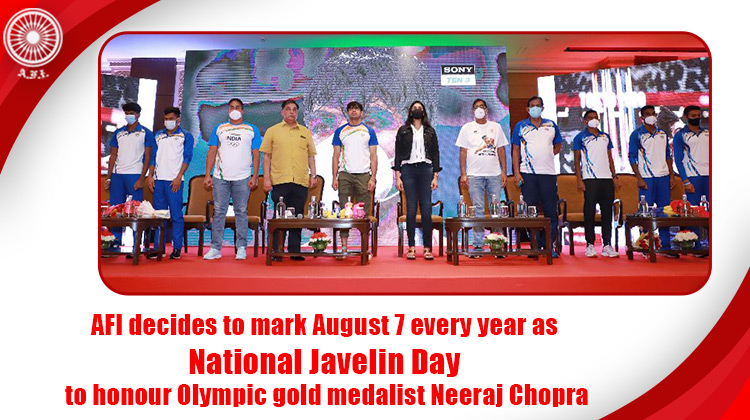 New Delhi, August 10: The Athletics Federation of India has announced that August 7 each year would be celebrated as National Javelin Throw Day with competitions in all States and Union Territories to commemorate Neeraj Chopra’s feat of winning the country’s first athletics gold medal in the Olympic Games in Tokyo with a throw of 87.58m on Saturday.

“We will celebrate August 7 as National Javelin Day from next year to mark Neeraj’s victory. All our affiliated units will hold Javelin competitions in the respective States (and Union Territories). And a year later, we will get all our 600-plus district units also to have similar competitions on August7,” said AFI Planning Committee Chairman Lalit K. Bhanot at function to felicitate him.

The 23-year-old Neeraj Chopra, India’s first Olympic medallist in track and field sport, said he was humbled by the announcement. “I am feeling good that the AFI is making my achievement to be remembered in the years to come. I will be happier if my gold medal win inspires youngsters to take to athletics, especially Javelin Throw,” he said.

“If the children are getting the Javelins and other facilities, I am sure they will come and take up the sport. I will be happy to cheer for them and they can be medal winners in the future, he told reporters at the media interaction that followed the wonderful felicitation ceremony at the well-appointed Taj Palace banquet hall.

“I am not going to be content with this Olympic gold. I will want to win the Commonwealth Games, Asian Games and Olympic Games titles again,” he said, pointing out that he was concerned about a few athletes testing positive for Covid-19 in the Games Village and that he was worried for himself.

AFI Senior Vice-President Anju Bobby George, the first Indian to win a World Athletics Championships medal when she picked up Long Jump bronze in 2003, said she was proud of Neeraj Chopra’s achievement that had ended a long wait for an athletics medal at the Olympic Games.

The AFI also felicitated Men’s 4x400m relay team that set a new Asian record at a time of 3:00.25, Kamalpreet Kaur who finished sixth in Women’s discus throw event with an effort of 63.70m and Avinash Sable who improved his own national record in the Men’s 3000m steeplechase event with a time of 8min 18.12sec at the Tokyo Olympic Games.