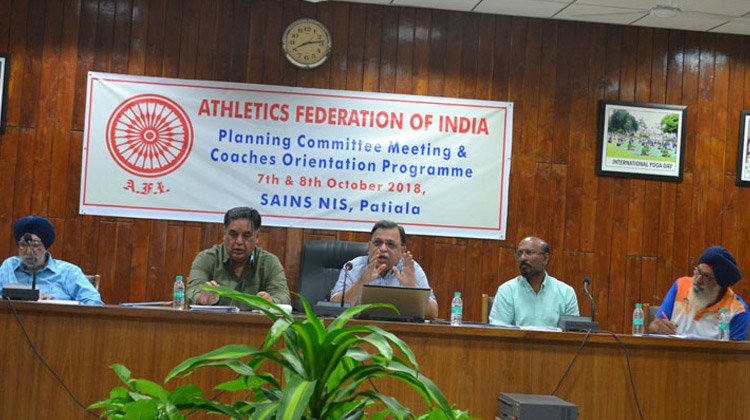 Patiala, October 9: Athletics Federation of India has articulated its strong resolve to upgrade the training programme for its athletes to help raise the profile of the country’s track and field sport from an Asian giant to one that will realise the long-standing dream of Olympic medals.

“It is time to follow up the good work of 2018 and recalibrate our goals aspirations,” AFI President Adille Sumariwalla said at the two-day AFI Coaches Orientation Programme at the Netaji Subash National Institute of Sports, Patiala. “We cannot be satisfied with the good showing at the Asian level and must get the breakthrough medals in the Olympic Games in Tokyo in 2020.”

At an interactive programme, AFI shared its vision with leading coaches and incorporated their feedback. “We are pleased with the readiness with which coaches bought-in to the idea that we must now move from a force at the Continental level to making a mark at the world level, with specific focus on the Olympic Games 2020,” Mr. Sumariwalla said.

After winning 19 medals, including seven gold, in the Asian Games on the back of team-work with Ministry of Youth Affairs and Sports, Sports Authority of India, coaches, athletes and support staff, AFI has identified a set of athletes which will train with their coaches at different overseas locations.

These athletes will also compete in international meets so that they can secure rankings integral to the qualification process for the IAAF World Athletics Championships 2019 in Doha and the Olympic Games. AFI helped the coaches understand the new qualification process that the International Association of Athletics Federations has now introduced.

The AFI President said it has been decided to secure the services of more overseas coaches for jumps and throws. “We are in the process of signing up coaches from Cuba and New Zealand to enable our athletes continue their evolution as top-class competitors,” he said. “We are sure we will have them in place before the end of the first camp after the Asian Games.”

AFI also indicated that its quest for Olympic medals will not take away the focus from those athletes, especially the juniors, who have the potential to help India retains its place among Asia’s best track and field nations. “We will continue to work on the assembly line so that we have ample depth and width of events,” he said.

AFI also reiterated that the Indian relay teams will be picked only from those who are selected to attend the National camps. It has identified a strong pool of men and women runners. “We believe that with the right training and approach, Indian squads can be in medal contention. We know there is ample room for improvement in the effort put in by the relay squads,” the AFI President said.

To keep Indian coaches updated with the latest technical rules and regulations of the competitions, AFI will organise workshops for the coaches before the major competitions. The AFI has also designed an online monitoring system to monitor the progress of athletes and reporting system for coaches. The system which is under trial phase will be launched shortly and it will be mandatory for coaches to update the progress of their athletes every two-weeks. The updates will include athletes’ progression, medical and health issues, workout patterns and performance results.