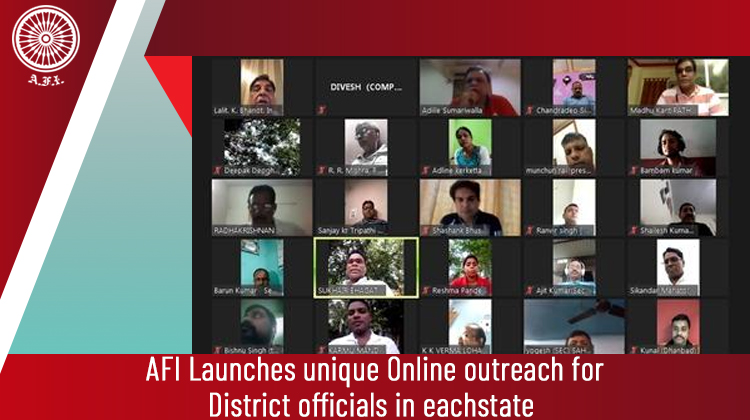 New Delhi, July 1: Athletics Federation of India resumed its focused outreach of district associations, using video conferencing facility to encourage the grassroots teams to work harder to make India a stronger athletics nation. “The districts are the backbone of the athletics movement in India and we are bound to encourage them,” AFI President Adille J Sumariwalla said.

AFI started its direct outreach to all district units, through State Associations, before the outbreak of COVID-19 with meetings in Kerala and Rajasthan. “With such gatherings not feasible in the current environment, we decided to use video conferencing to motivate the district units to enhance their contribution to the evolution of track and field across the country,” he said.

Beginning with Jharkhand on Tuesday, West Bengal and Haryana on Wednesday, AFI officials, including High-Performance Director Volker Herrmann and Deputy Chief Coach Radhakrishnan Nair, will interact with officials from districts associations of all States and Union Territories in the coming fortnight.

“If we have to rise from being a force at the Asian level to making a mark at the global stage, we will need every district to lend its shoulder to the wheel,” he told district associations in Jharkhand. “While we want each district to have at least 25 qualified technical officials and one IAAF Level 1 coach, we are also warning them against doping, age-fraud and over-training.”

AFI has been in the forefront of battling the twin scourges of doping and age-fraud that hurt Indian sport. “We have identified over-training of athletes as another primary reason for the disappearance of some young talent. We are now endeavouring to convince officials at the grassroots level to tell coaches to guard against the three dangers,” Mr. Sumariwalla said.

“We are delighted with the positive response we have had from the meetings so far, though the road ahead is exciting and challenging at the same time. The district units realise that AFI is keen to decentralise the administration of athletics by sharing responsibility with those working at the grassroots,” he said.

Since the inception of MILO National Inter-District Junior Athletics Meet (NIDJAM) in 2003, AFI has been the only National Sports Federation to conduct a national-level meet for districts, bearing the expense of travel, board and lodging of their teams. MILO NIDJAM has emerged as AFI’s flagship and the largest grassroots programme.

AFI Planning Committee Chairman Dr. Lalit K. Bhanot reiterated that officials of all district associations bear great responsibility in drawing more youngsters to athletics. “We are aiming to get each district to be self-sufficient when it comes to technical conduct of their meets and coaching athletes in the early stages of their development,” he said.

“We are encouraging the district officials to rope in as many former athletes in getting them to take up the AFI Pre-level 1 coaching programme so that they all adhere to the right training principles at the grassroot level,” he said. “It is an important aspect of coaching the under-14 and under-16 athletes who participate in MILO NIDJAM,” he said.

It is also the only Federation to reach out to district units to not only encourage them to conduct regular meets and training for their athletes but also to ensure greater transparency.