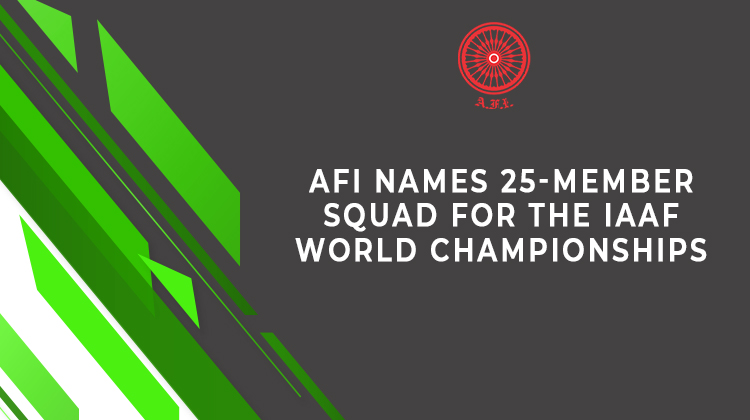 New Delhi, September 8: The Athletics Federation of India selection committee on Monday picked a 25-member national team including 16 men and nine women for the IAAF World Championships to be held in Doha, Qatar, from September 27 to October 6. With less than a year to go for the Olympic Games in Tokyo, the well-prepared squad will carry the hopes of the track and field fans of the country.

The AFI believes that the 4x400m relay teams will all perform better than they did in the World Relays in Yokohama in May last. “We have invested a lot of time in the 400m runners, getting them to train under renowned coach Galina Bukharina. We believe that the squad has been well prepared to deliver the best results on the World stage,” AFI President AdilleJ Sumariwalla said.

Metric miler Jinson Johnson, who is now training with Coach Scott Simmons in Colarado Springs, United States of America, has caught the eye with his consistency. In the recent months, he improved his own National record in the 1500m twice, first with a time of 3:37.62 in Nijmegen, the Netherlands, on June 15 and then 3:35.24 in Berlin on September 1 to make the grade.

Long jumper M Sreeshankar, among the first Indians to attain the IAAF qualifying standard with a leap of 8.20m in the National Open Championships in Bhubaneswar in September last year, has regained form after a heel injury kept him away from the Asian Championships in Doha in April. He recently found the 8.00m mark again and will gain from competing in the big stage.

While 400m runner Arokia Rajiv is unavailable due to injury, the selectors decided to discuss the case of javelin thrower Neeraj Chopra who is undergoing rehabilitation programme after an elbow surgery at a later stage.Selection committee also approved the names of sprinters Dutee Chand (100m Women), ArchanaSuseentran (200m Women) and high jumper Tejaswin Shankar subject to invitation from IAAF based on their world rankings. The committee also decided to conduct confirmatory trial for quarter miler Anjali Devi for selection in the team in individual women’s 400m. The trial will be conducted on 21st September 2019 at NS-NIS Patiala.