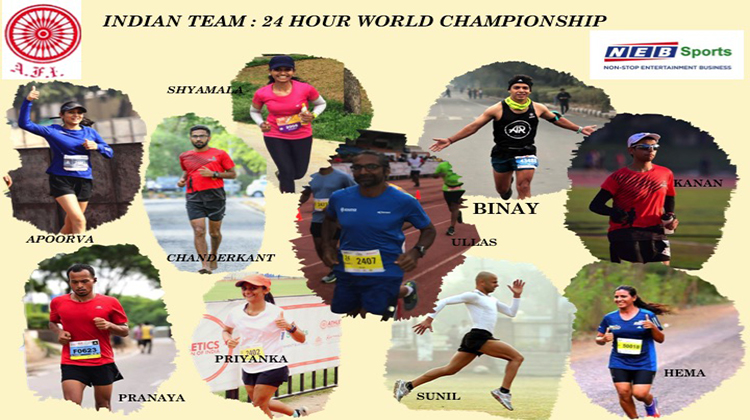 New Delhi. The Athletics Federation of India has announced the team for the 2019 IAU 24 Hour World Championshipsto be held at Albi, Franceon 26–27 October 2019. The team comprises six men and four women ultra runners for the competition.

AFI had set standards, which required the athlete to have run a minimum of 205 km (men) and 165km (women)in a 24-hour race, in a period of 18 months before the date of the Championship. Races completed during the period of 26th April 2018 to 31st July 2019 (last day for submission of the application) were considered. In addition athletes meeting the qualification standards were also expected to have run an ultra race as a proof of fitness between 26th January 2019 to 31st July 2019.

At the 2018 IAU 24 Hour Asia & Oceania Championship in Taipei, the Indian team had won the first medal both in the individual and team event in ultrarunning. UllasNarayana had covered a distance of 250 km to win a bronze medal in a world class field in the championships in Taipei in December 2018.

“The performance of Indian ultra and trail runners on the global level is improving. More Indian Runners are involved in the sport of ultra and trail running which has encouraged AFI and NEB Sports to bid for hosting the 2020 IAU 24 Hour and 2021 IAU 100 km Asia & Oceania Championships in India. I wish the team all the very best”, saidAdilleSumariwalla, President AFI.

NEB Sports has been one of the prominent supporters of ultrarunning in India and has once again come forward to sponsor the team for the 24 Hour World Championships along with IDBI Federal Life Insurance.