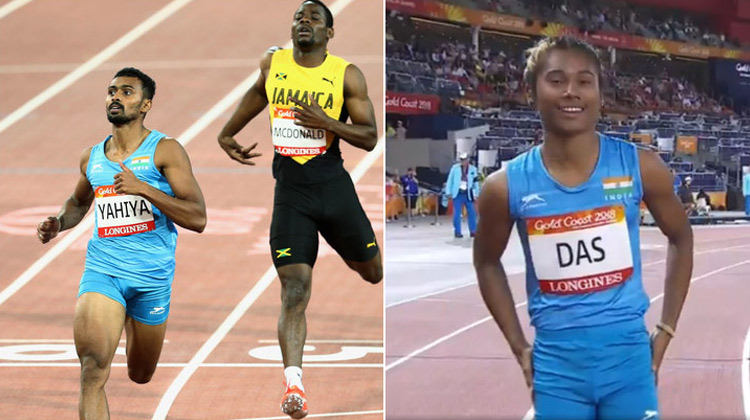 Gold Coast. After two days of disappointment, the athletics track finally came alive for India at the Commonwealth Games 2018 in Gold Coast- Australia. Mohammad Anas Yahiya ran the race of his lifetime in the final of the 400m at the Carrara stadium and shattered the national record to finish fourth in a world class field. Running in lane 7, Anas clocked 45.31 seconds to erase the old mark, his own incidentally of 45.31 seconds recorded last year.

Running on a track that had just received a shower and slowed down, Anas remained within touching distance of his competitors before falling .2 of a second short of the bronze medal position of 45.11 seconds which was set by Javon Francis of Jamaica. Botswana’s Isaac Makwala and Baboloki Thebe took gold and silver with a time of 44.35 and 45.09 respectively.

The result exhausted Anas who had impressed just in qualifying for the finals on Tuesday. “I am really tired. I just want to sleep now,” he said in the media room. After his exhilarating performance, the 23-year-old from Kerala has certainly earned a good night’s sleep.

While Anas might have missed out on a medal, Hima Das has a very good chance of putting herself in the record books herself. Das, running in her first Commonwealth Games, ran a breathtaking personal best time of 51.53 seconds to finish third in the first semifinal heat. With only the top two runners from each heat qualifying for the finals, Das had to wait for the results of the other two semifinals to know her fate. It would be just about enough as Das Qualified for the final as one of the two fastest losers in the semifinals. Das’ timing however was the seventh fastest of the eight finalists.

It was a remarkable achievement for an athlete who had not begun training formally until a year ago and only started running the 400m a few months back. The 18-year-old from Assam had initially wanted to be a football player. However she has managed to improve with every competition. Her semifinal timing of 51.53 shaved .44 seconds off her previous best of 51.97seconds set at the Federation Cup in March. Next in sight will be Manjit Kaur’s national record of 51.05 seconds set in 2004.

Das might have only qualified for the final in seventh place but her improvement has been remarkable and few would want to predict her time in the final.

Dharun Ayyasamy was the third Indian on the track on the day. Although he didn’t advance out of the heats in the men’s 400m relay event, Ayyasamy, the national record holder finished just shy of qualification for the semifinals with a time of 49.85 seconds. Although the result was not the one Ayyasamy, who’s national record stands at 49.54 seconds would have wanted, it was a creditable achievement for the 21-year-old who has only recently recovered from a bout of typhoid just a few weeks back.