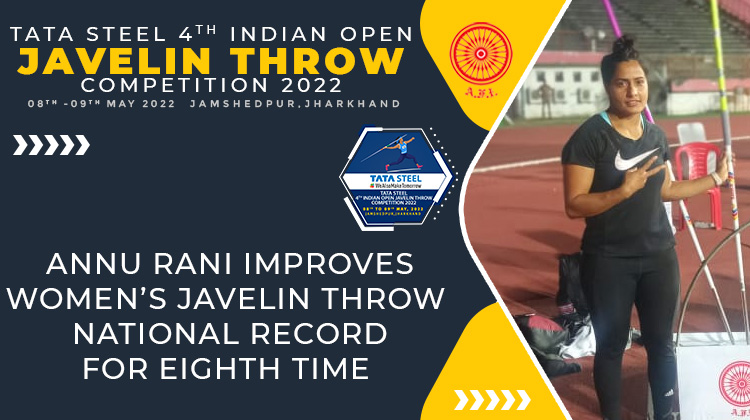 Jamshedpur, May 8: Annu Rani (Uttar Pradesh) broke her own Javelin Throw National Record when winning the women’s title in the Tata Steel fourth AFI Indian Open Javelin Throw Competition under floodlights at the JRD Tata Sports Complex here today. She threw the spear to 63.82m, a 58cm improvement on her own mark set in Patiala on March 15, 2021.

The 29-year-old showed she has put behind the disappointment of the Olympic Games by rewriting the National Record for the eighth time since she first claimed it from Suman Devi on June 7, 2014. On Sunday night, Annu Rani took three other throws that went to 60.10m, 56.60m and 58.13m before passing the last two attempts.

In other events today, 17-year-old Yash Saini (Haryana), made a victorious debut at the National-level, winning the Boys U18 crown with a string of consistent throws. His 67.42m is the second best throw by an Indian U18 lad since September 2019. Vivek Kumar (Madhya Pradesh), a Boys U20 silver medallist in the last edition in New Delhi, claimed gold this time with a 68.67m effort. Delhi’s Disha won the Girls U16 event with a best throw of 34.87m.

Son of policeman, Yash Saini decided to overcome a slight headwind and a niggle in the elbow by taking a leaf out of Neeraj Chopra’s Olympic campaign – a masterly opening throw. The 12th standard student who trains in Giri Centre in Chaudhary Charan Singh Haryana Agricultural University Sports Complex,

His maiden throw in a National-level competition was the one that ensured him the title compares favourably with his State-mate Sujit’s 68.38m effort which was the best achieved by an Indian U18 thrower last year. Yash followed up his first throw with efforts of 65.21, 63.24, 64.05 and 65.46m before easing off with a 57.85m final throw.

“I was hoping to throw with an international Javelin. I have thrown 72m in training and would have been happy if I had matched that but considering the slight wind blowing towards us and my niggle, I am happy that I won gold on debut. I have been training for three years but it is only now that my coaches Arvind Kumar and Dharmender believed I was ready,” he said.