Athletics must work hard to hold attention in a cluttered landscape: Lord Coe 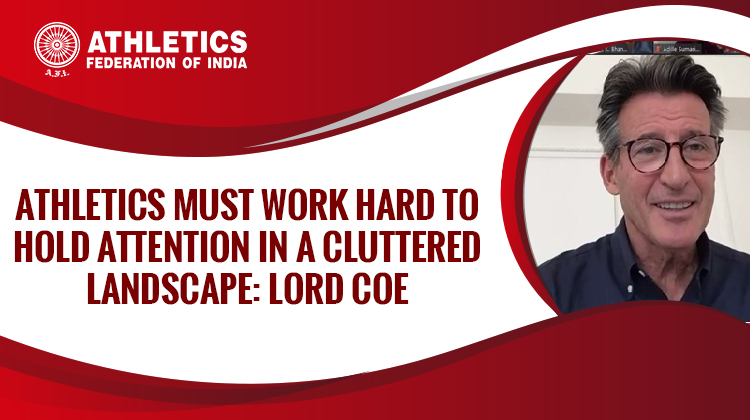 AFI Media
New Delhi, July 30:  World Athletics President Lord Sebastian Coe said the entire track and field fraternity has to work very hard to engage new, especially younger, audiences to attract them to the sport. Opening a seminar for announcers and event presentation managers in the modern era, he underlined the importance of holding the attention of the audiences in a cluttered landscape.

The seminar, being conducted by the Athletics Federation of India in partnership with the South Asian Athletics Federation, the Oceania Athletics Association and the European Athletics, has drawn more than 1500 announcers and event presenters from 42 countries. It has been designed to ensure that fans get a good impression of the sport even at the grassroots level.

Lord Coe pointed out that one of the important elements of early research, commissioned by World Athletics, was the finding that 75 per cent of fans wanted a change and a three-quarters of those specified change around the event presentation in stadiums and television and on other screens that they engage.

“It made me realise that it is probably more important now than has even been to deliver young fans quality information in a consumable way, whether they are on hay bales at the side of the grass track or whether they’re sitting in an international stadium. The speed with which you can convey that information and bring humor occasionally are pieces great of human interactivity,” he said.

“If the experiences we provide them is anything less that they expect, they move on very quickly. Not just to another sport but also out of sport, to music, films and other things,” Lord Coe said. “Consumption practices of young have become a-la carte. The entertainment landscape is so complicated that everybody is fighting for a few minutes of their attention.”

The World Athletics President said the sport was not just about the God-given talents of the athletes. “It is crucially about the way that the crowd is brought into the tent, to the theatre and actually, on most occasions, be a part of and even maybe the central part of that theatre. That’s why today’s session is so important,” he said.

Athletics Federation of India President Adille J. Sumariwalla said the unique seminar was conceived to make athletics attractive to its fans at all levels. “AFI has been in the forefront to knowledge upgradation during the COVID-19 pandemic. This seminar is in keeping with our mission to give the fans a great experience at all levels, from National to district meets,” he said.

South Asian Athletics Federation President Dr. Lalit K. Bhanot said that the right event presentation was crucial in a very commercial world. “The connect with all spectators has to be established right from the beginning and our attempt is to ensure that all our meets are conducted with this in mind,” he said.

President of European Athletics Dobromir Karamarinov and Robin Sapona Eugenio also attended the seminar. Geoff Wightman, who was the announcer for the athletics competitions at the 2012 London Olympics and Chris Cohen, athletics competition director for 2020 Tokyo Olympics, were the keynote speakers on the day-1 of the seminar while Pierce O’Callaghan, Project Director- World Athletics and AFI Technical Committee Chairman Stanley Jones moderated the sessions.