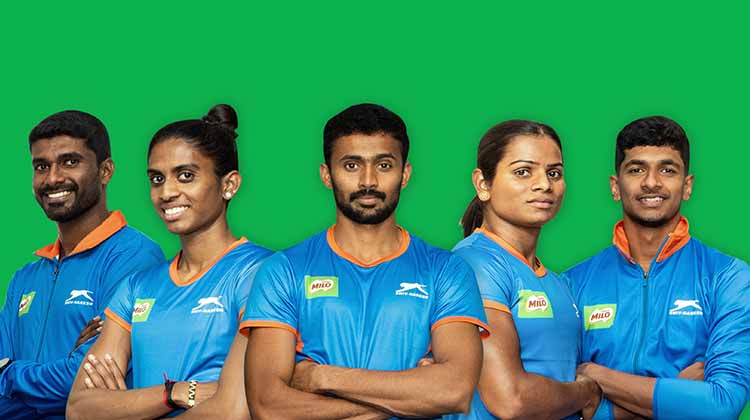 Doha (Qatar), September 25: The 25-member Indian squad will compete in the 17th IAAF World Athletics Championships, Doha 2019 in a new team uniform with NestléMILO as the team’s Official Partner. Athletics Federation of India launched the new kit here, ahead of the year’s biggest competition in track and field sport.

AFI President Adille Sumariwalla said the kit would be worn by the National Athletics team at all international events except for the Olympic Games, Commonwealth Games and the Asian Games. “Our athletes are on the cusp of making a mark at the global level, having consistently done well at the Asian level. And we are very pleased thatNestléMILOis coming on board as our Official Partner,” he said.

“AFI is excited about its partnership with NestléMILO, globally known to providedairy based beverage solutions rooted in Nutrition, Health & Wellness,” Mr. Sumariwalla said. “Facilitated by our marketing partner, Meraki Sport and Entertainment, we have been able to extend our partnership with MILO from our grassroots level initiative, the National Inter-District Junior Athletics Meet.”

Last month, AFI announced a major sponsorship deal for the flagship talent hunt initiative NIDJAM. MILO now moves in deeper, by working with the Federation to create scientific approaches and feasible nutrition programmes for the junior athletes and championships under the AFI banner.

Nestlé India Ltd, Director – Dairy,Mr. Vineet Singh said “We are delighted about MILO’spartnership with theAthletics Federation of India. MILO believes that sports helps children imbibe life values that are critical for personality development and help set the foundation for a successful future. We are confident that the performance of Team India will inspire children across the country to take up sports and adopt an active, healthy lifestyle.”

MILO, the world’s leading Cocoa Malt Beverage, has a rich legacy, having nourished young champions around the world for more than 80 years by providing nutritious energy and the inspiration to grow with sports. Over 36 million serves of MILO are consumed daily in more than 50 countries across the world.