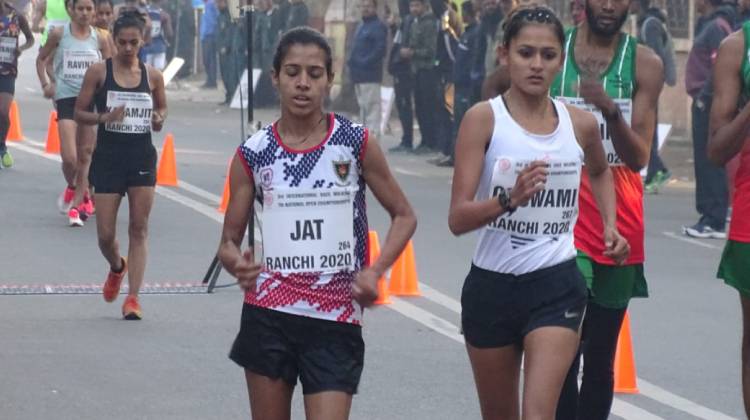 Ranchi, February 15: Bhawana Jat’s elation at the finish was writ as large on her face as her determination as she won the women’s 20km race walk in the 7th National Race Walking Championships here on Saturday, with a National record that enabled her breach the qualification standard for the Olympic Games in Tokyo.

Her time of 1:29:54.00 not only improved Baby Sowmya’s National Record time of 1:31:29.00 set in Delhi two year ago but also was six seconds below the Olympic qualification standard laid down by World Athletics. Uttar Pradesh’s Priyanka Goswami was 36 seconds shy of the qualification mark.

Bhawana Jat, whose first taste of victory came in the National Open Championship here in October last, said her she had trained to finish sooner. “I put in a lot of hard work in training over the last three months and wanted to come home in 1:28-1:29,” she said. “I am grateful to my parents for always supporting me & to my department (Indian Railways).”

Trailing Priyanka Goswami by a second at the 1km-mark and waking abreast of her Railway colleague at the 2km-mark, she stayed in front after opening up a 9-second lead at the 4km-mark.

Priyanka Goswami, who was runner up to Sowmya Baby in Chennai last year, had to settle for second place again once she realised that Bhawana Jat was in great form and could not be matched. Also, with the Olympic qualification standard out of her reach, she trained her focus on finishing the distance in her personal best time.

Sandeep Kumar won the men’s race quite comfortably, leading from the start to finish. He was a bit disappointed that despite his best effort, the Olympic qualification standard was still 34 seconds farther from him. “If I am selected for Asian Championships in Japan next month, I will try to improve the time and try to qualify for Tokyo2020,” he said.

KT Irfan, who was in the bunch trailing Sandeep Kumar by a minute at the halfway stage, pulled out, leaving Rahul (Haryana), Vikash Singh (Delhi) and Ganapathi Krishnan (Tamil Nadu) to fight for the second place. It was in the final 3km that Rahul pulled away from Vikash Singh to be able to claim the runner-up slot.