Gurpreet, Seema and Sandra Babu catch the eye on the opening day in NJAC 2019 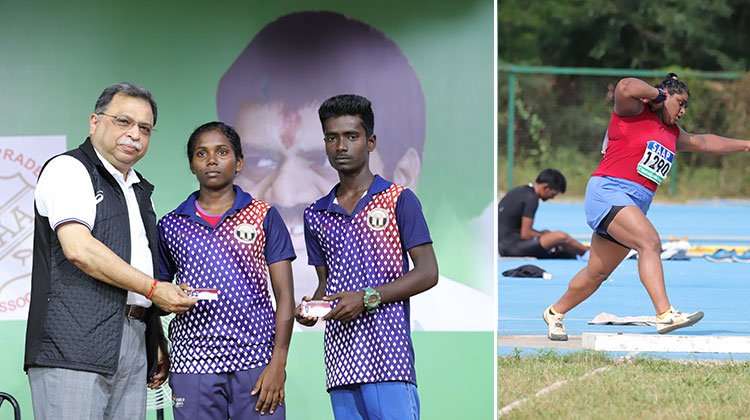 Gurpreet (Haryana) marked his return to track with a victory on Saturday, pulling away from his pursuers to win the 10000m in 30:52.00, his personal best time over the distance.  He was away from major competition since claiming bronze in 5000m and silver 10000m in the under-20 category last year Seema (Himachal Pradesh) overcame the disappointment of finishing out of the podium in the Federation Cup for Juniors in Tiurvannamalai in September with a comfortable win in the girls under-20 5000m with a personal best time of 17:03.14. It was an improvement on her 17:24.41 clocked in Moodbidri on November 24 last.

Poonam Dinkar Sonune, who won the 3000-5000m double in the last edition in Ranchi, fell behind at the halfway stage after tripping, leaving Amrita Patel and Seema to do battle for the top spot. Amrita Patel did much of the hard work but Seema, whose greater competitive experience made her stick to the leader like a shadow, sprinted ahead with 300m left.

Sandra Babu’s opening jump of 6.16m shattered the field in the girls under-20 long jump event. She had another leap of 6.10m amidst two fouls. But Odisha’s Manisha Merel showed that she could be a fine competitor by coming up with three jumps beyond the 6m mark, each a personal best, and while she kept improving, she was unable to cross 6.07m that was good for second place.

Delhi’s Arvind Sharma, silver medallist last year, won the boys under-16 discus throw with a 50.16m effort that contrasted three fouls. Through four rounds, Rajasthan’s Akshay Sheoran would have thought that gold would come his way after he 49.16m throw that placed him in the lead. However, Jatin Dhaka (49.39m) and Arvind Sharma passed his mark with their fifth throws.

Earlier, in keeping with its no-needle policy, AFI barred Chandigarh’s Parkash Singh and Rajasthan’s Dhananjay from the Championships. Syringes and vials were found in their bags in the Call Room.

AFI also became possibly the first National Sports Federation to issue biometrics card to athletes so that they do not have to undergo long age-verification process at each meet.

Adille J Sumariwalla, AFI President said, “With this competition, AFI has implemented biometric unique identification process that will prove to be a game changer in tackling age fraud and cheating. We want to promote fair play and keep the sport clean. We want to save the genuine athletes who suffer at the hands of age frauds. Same is with doping, we are keeping a close eye during meets and follow no needle policy. Anyone caught with syringes will be suspended with immediate effect,” he said.

The results (all finals):