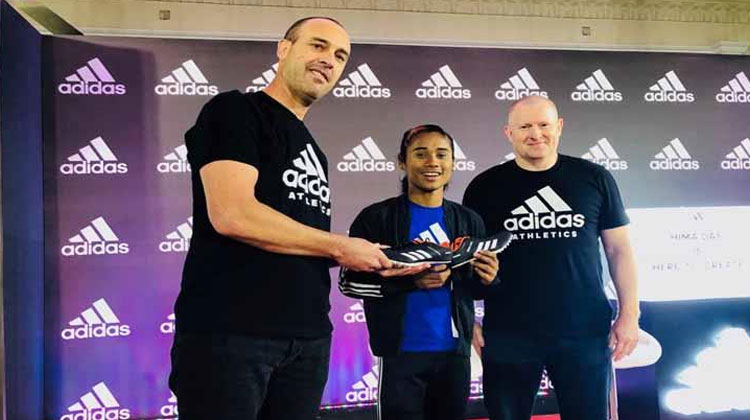 New Delhi. Adidas today welcomed young athletics sensation Hima Das into the adidas family. Hima, already a big fan of adidas (she wore adidas sprint spikes in her historic run at the Youth Championships and at the Asian Games) will now be equipped with the very best offerings from adidas for her racing and training needs, as she continues her journey to becoming the best sprinter in the world.

At only 18, the Indian sprinter who is now popularly being referred to as “Golden Girl” and “Dhing Express” has made history by becoming the first Indian athlete to win a gold medal at the world level. Hima, a tenacious and perseverant teenager, became the first ever Indian athlete to win a gold medal at a global track event when she won the women’s 400m at the IAAF World Under-20 Championships in Finland, followed by three podiums at the recently concluded Asian Games in Indonesia.

At the announcement of the association, adidas India Managing Director, Mr.  Dave Thomas,  presented Hima with an Adizero Prime SP, one of adidas’ most premium and technical sprinting shoes. The personalised shoe features the sprinter’s name “HIMA DAS” on the right shoe and “CREATE HISTORY” on the left shoe.

“At adidas we believe that ‘through sport, we have the power to change lives’ and Hima is a great example of this. Many of our associations and partnerships are focused on empowering youth in India and making a positive change. We at adidas also believe that as the leading sports brand in India it is important to encourage girls to take up sport and keep playing sport as they get older. Over the last couple of years, Hima and many other Indian women have emerged as torchbearers with their outstanding performances. adidas is very keen to support India’s youth and to build a stronger sporting spirit and ambition in them”, said Mr. Dave Thomas, MD, adidas India

Also present at the announcement was Mr. Sean Van Wyk, Senior Marketing Director, adidas India who said, “Hima is an inspiration not just for women and girls, but for the entire country and we take pride in having her join team adidas. She has created history and we shall help her in her journey to maximize her potential and become the best in the world. On this journey with her, we shall, together, inspire today’s youth to take to sports and create a positive change in and around their lives.”

Delighted about her relationship with adidas, Hima Das said: “I have always aspired to wear adidas shoes. In fact, I have been wearing them for the last few years and was wearing them during the Youth Championships and the Asian Games. I feel extremely proud to join the adidas family and be a part of a great group of global athletes. adidas has an incredible track record for helping athletes across sports and enabling them to reach the peak of their sport. With them, I hope to take my performances to the next level on the field, and also help create change off it. Our aim together is to improve participation of Indian youth in sports and women empowerment and I am confident of creating the change with adidas.”

In the last decade, adidas has been working with many young athletes and investing in grassroot initiatives to empower young athletes to take to sports. Some of the grassroot investments include the adidas Runners community, the Tango league and adidas Base for football, and adidas Junior Open in tennis.