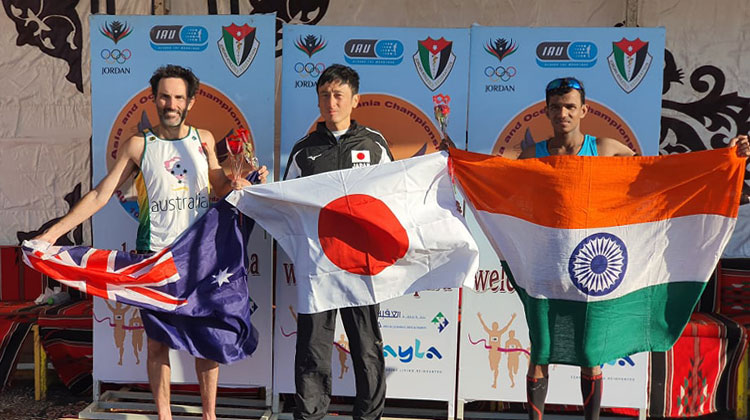 Aqaba (Jordan). At the 100K Asia-Oceania Championships held recently, Indian men and women ran on to the podium bagging the men’s team gold, the women’s team silver and in individual performance, the bronze by Deepak Bandbe. Held on a 10K road loop on 23rd November 2019, in the coastal city of Aqaba, Jordan runners from Japan, Australia, Jordan, Lebanon and India participated.

The ultra runners faced strong winds and heat which took its toll causing a couple of runners to pull out and left a few struggling to complete within the cut-off time of 12 hours. The most unfortunate pull out was that of TatsuyaItagaki (JPN) who was leading up to the 95th km when he collapsed. The first position was bagged by Japan’s Hideaki Yamauchi (7:11:42 h); second place by Australia’s Brendan Davies (7:49:16 h) and the Bronze was won by Deepak Bandbe who very steadily finished in 8:04:16 h also creating a new Indian Men’s Best Performance in 100K.

Earlier, on 26-27 October 2019, at the 24 Hour World Championships at Albi France, a team of 05 men and 04 women participated. While most of the men and women achieved a personal best at the event, the most exceptional performance was that of Apoorva Chaudhary and PriyankaBhat. Apoorva finished 47th in a field of 147 women covering a distance of 202.940 K in 24 hours becoming the first Indian woman to cross the 200 Km mark and setting a new challenge for Indian women, while Priyanka added 22 km in a matter of three months to complete 192 k in 24 hours.

Both teams sent to France and Jordan were sponsored by NEB Sports and IDBI Federal Life insurance. Very recently NEB Sports also won the opportunity to host the 24 Hour and 100 K Asia and Oceania Championships in Bengaluru in 2020 and 2021 respectively.