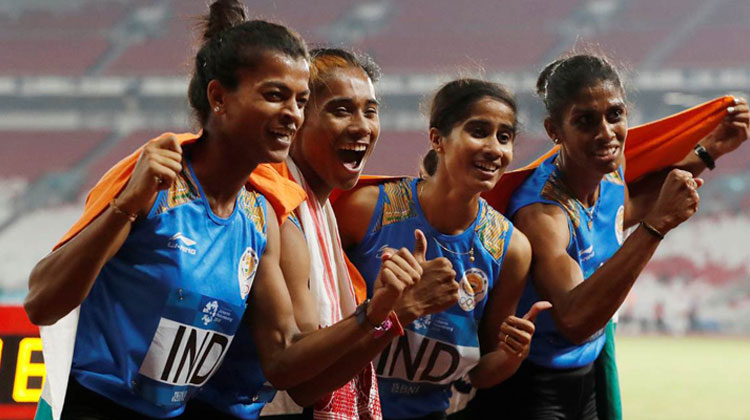 Jakarta (Indonesia). India finished the 2018 Asian Games with a total of 7 gold, 10 silver and 2 bronze medals in Athletics. This was India’s second highest medal tally in Athletics ever at the Asiad, as the contingent finished the final day of athletics action with two gold medals.

Hima Das ran the lead leg of the race for team India, giving team India a solid start, and she was followed by Saritaben Gaikwad and MR Poovamma, who extended the gap between India and the rest of the teams. As women’s individual 400 metres gold medallist Salwa Eid Naser chased VK Vismaya, the latter ran a composed race to finish well ahead of the Bahrain team to clinch gold. This was Hima Das’ third medal of these Asian Games, to go with her silver in the 400 metres individual race and the mixed 4X400 relay.

National record holder Jinson Johnson won silver in the 800 metres, but he was not to be denied in the 1500, as Jinson won the gold, making it two medals for the Kerala runner at the 2018 Asian Games.

Johnson ran a superb, tactical race, holding back till the final 300 metres to start pushing the pace of the race as a late kick won him his first Asiad gold. The 27-year-old had broken Bahadur Prasad’s national record in the event at the Inter-State Championships.

Manjit Singh, the 800 metres gold medallist, ran a similar race to his winning run earlier, but left his charge too late to finish fourth, denying him a chance to win two medals.

The men’s 4X400 relay team brought home India’s 19th and final athletics medal, a silver. Kunhu Muhammed ran the lead leg, followed by Ayyasamy Dharun. By the time India’s fastest quarter-miler Muhammed Anas took over in the 3rd leg, Qatar’s lead was too much and despite his and Arokia Rajiv’s best efforts, the male quarter could not make up the deficit.

Seema Punia finished with a bronze in the women’s Discus Throw, managing a seasonal best of 62.26 metres, finishing behind two Chinese throwers. Punia added a bronze to her gold medal at Incheon four years ago. Sandeep Kumari finished fifth, managing a best attempt of 54.61 metres.

PU Chitra bagged India’s second bronze of the day in the women’s 1500 metres final. The 2017 Asian Athletics Championships winner Chitra won the race in a time of 4:12.56.

Sandeep Kumar was disqualified in the men’s 50 km race for three faults.