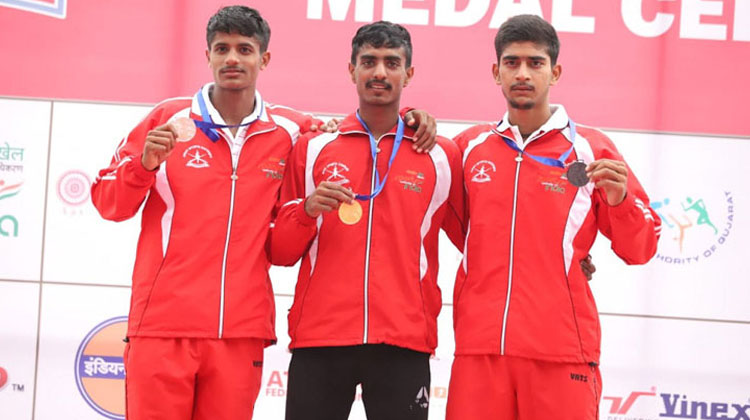 Vadodara. Haryana athlete Mohit Kumar set the stage alight on the second day of the 15th National Youth Athletics Championships, even as he set a new youth national record in the men’s decathlon. Mohit tallied 6707 points at the end of the ten events to erase the old mark of 6618 points set by A Sangwan last year.  Mohit was challenged all the way by Andhra Pradesh athlete Sourabh Rathi who also went past the old national record before falling just two points short of Mohit with a total of 6705 points. Both marks were also far superior to the old meet record of 6198 points secured by Rajesh at Thehnipalam in 2016.

The men’s decathlon was for all purposes a two-man competition with Mohit sealing the win with the 1500m – the final race at the Manjalpur Sports Complex in Vadodara on Sunday. Before the race, Mohit had trailed Rathi, having secured with 5954 points after nine events compared to 5959 by his opponent. At the 1500m though, Mohit would clock 4:28.75 seconds to earn 753 points while Rathi clocked 4:29.81 seconds to earn 746 points.

Taking third place was Maharashtra’s Usaid Khan who also went better than the meet record with a total of 6429 points. Khan was infact in first place after the first five events of the competition with 3461 points compared to 3322 points for Mohit and 3308 points for Rathi, but had a poor second day of competition, culminating in 607 points for the 1500m in which he clocked 4:51.96 seconds.

In other events, Rahul Sharma of Uttar Pradesh and Josna Simov of Karnataka would earn the title of the fastest man and woman of the competition. Sharma clocked 10.80 seconds to claim the gold medal in the final of the men’s 100m. He beat out Karan Hegiste of Maharashtra who clocked 10.908 seconds to take silver in a photo finish with S Nehal of Delhi clinching the bronze medal with a time of 10.910 seconds.

Girls 800m final was a photo finish race where Pooja of Haryana grabbed the gold with the timing of 2:10.88. Radha Chaudhary of Delhi settled for silver clocking 2:10.94 while Tannu Lathar (2:12.90), also from Delhi, bagged bronze.

In the women’s competition Simov, a seventeen-year-old from Karnataka crossed the finish line first with a time of 12.23 seconds. She took the top step of the podium followed by Giridharani of Tamil Nadu who claimed silver with a time of 12.33 seconds while Kirti Bhoite of Maharashtra took the bronze medal with a time of 12.46 seconds.

National record holder Aparna Roy had a less than stellar day on the track but still did enough to claim the women’s 100m hurdles title. Roy who holds the national mark of 13.98 seconds clocked 14.08 seconds on Sunday to finish just ahead of P Thabitha of Tamil Nadu who clocked 14.10 seconds. Pratibha Kumari of Jharkhand claimed the final step on the podium with a time of 14.57 seconds.

Long jumper Sandra Babu who also fall short of a personal best but still earn a gold medal. Babu who has a personal best of 6.07m in the long jump competition could only manage 5.62m on Sunday but still was clear of Ambrikha Narzary of Assam who took silver in 5.56m and Manisha Merel of Orissa who cleared 5.38m to take bronze.