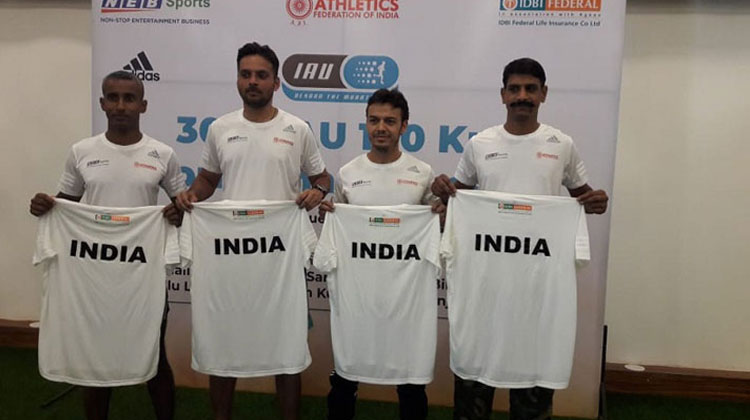 Selected by Athletics Federation of India (AFI), the seven-member Indian team comprising six men and one woman athlete will participate in the 100km World Championships for the first time. The event is organised by the International Association of Ultrarunners (IAU) every two years.

Based on their previous performances in ultrarunning events, the AFI had selected Vikash Malik, Lt Cdr Abhinav Jha, Sandeep Kumar, Lallu Lal Meena, Binay Kumar Sah, Suman Kumar Mishra and Anjali Saraogi, the only woman in the team, to represent India at the world championships.

Adille J Sumariwalla, AFI President, said, “It is a great initiative by NEB Sports. Earlier, when we declared that Indian team will participate in this competition for the very first time, we invited applications from all the ultrarunners and said selected athletes will have to bear the cost of participation on their own. But, at the same time we also approached NEB Sports to support the team and I am really happy that Mr. Nagaraj Adiga, the managing director of NEB Sports, readily accepted our request. It is a major boost for the sport of ultrarunning in India. I also want to thank IDBI Federal Insurance and Adidas who are also supporting the Indian team.”

For Nagraj Adiga, a running enthusiast himself and the man behind success story of Bengaluru Marathon, New Delhi Marathon and 12 Hours / 24 Hours and 36 Hours Stadium runs in the country, participation of Indian team in 100km World Championships is a dream come true.

“I am a great supporter of ultrarunning and NEB Sports through its various ultrarunning events and marathon races across the country is promoting the sport as much as possible. It is a proud moment for all of us that now our runners are going to represent India at international level in World Championships. I just want to tell these athletes that they should do their best and achieve good results and leave everything behind, we are ready to support them,” said NEB Sports chief.

About Ultra-marathons- Ultra running, Trail running and Mountain races are events that are growing worldwide especially in Europe, America and Asia. The International Association of Athletics Federations (IAAF) has recognized these sporting events. The International Association of Ultra runners (IAU), the international governing body of ultra distance running and the International Trail Running Association (ITRA) conduct World Championships. The Athletics Federation of India (AFI) is a member of the IAAF, IAU and ITRA. Through the AFI, Indian ultrarunners have the opportunity to participate at the World and Regional Championships.

Indian Achievements- Ultra running as a sport began in India around 2007-08. Since then it has grown rather rapidly, with more and more runners venturing into this field each year. The year 2007 saw mere 65 finishers in India’s only ultrarace at that time. Today more than 1500 runners (and counting) participate in about 18 ultraraces being organised across the country. The AFI sent a team comprising Ullas Narayan and Kieren D’Souza for India’s first ever participation at the Trail World Championships, Italy in June 2017; and, Meenal Kotak, Aparna Choudhary, Ullas Narayan and Kieren D’Souza represented the country at the 24 Hour World Championships at Belfast in July 2017. The participation of Indian athletes had provided athletes the much need exposure to the international arena and has also fueled the passion of ultra-running among others.