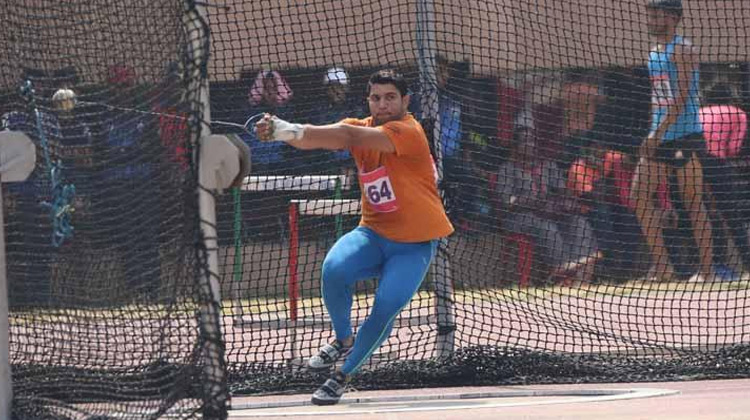 Ranchi. Hammer thrower Nitesh Poonia was the star of the third day of the 34th Junior National Athletics Championships in Ranchi on Sunday, creating a new national record en route to winning the U-18 boys event at the Birsa Munda Athletics Stadium on Sunday.

Poonia flung the hammer to a distance of 81.47m, going past the previous national mark of 75.45m held by Ashish Jhakar by over six meters. Poonia’s throw was the world’s fourth best throw recorded by a U-18 men’s athlete this year. The 18-year-old from Rajasthan’s dominance was such that he beat second placed Updesh Singh by nearly 15 meters. The silver medal winner could only fling the hammer to a distance of 66.93m. Bronze meanwhile went to Rajasthan’s Praveen Kumar who recorded a throw of 65.06m.

To put Poonia’s throw in perspective, the men’s U-20 hammer throw was won by Uttar Pradesh’s Vikranta who threw the hammer 69.46m. Silver and bronze went to Badal of Rajasthan and Ajay Kumar of Haryana who threw the ball and chain 66.02m and 63.38m respectively.

Poonia wasn’t the only youngster to shine in Ranchi on Sunday. The day got off to a bright start with Haryana racewalkersParveen Kumar and Amit striding away to a new national mark in the U-18 and U-16 boyscategories, respectively.

15-year-old Amit clocked 21.17.63 seconds to eclipse the previous mark of 21.55.60 seconds that Daljeet Singh recorded 28 years ago at the Muzzaffarpur Junior National Championships in 1990.

Despite recording a comparatively fast time which was less than a second off the old record, Uttarakhand’s Sachin Singh Bohra had to be satisfied with a silver medal with his time of 21.56.79 seconds. Delhi athlete Manish took the third step on the podium with a time of 22.00.19 seconds.

Another Haryana athlete would match a record in the boys U-16 long jump competition. 16-year-old Pankaj Verma recorded a best jump of 7.27m to win his event. His effort matched that of statemate Sahil Mahabali who recorded that mark in 2013. Verma only made three legal jumps on the day. He started the competition on a poor note with an opening foul jump and then a jump of 6.99m. After a mediocre third attempt of 5.38m, he recorded his best jump of the evening.

Fourteen-year-oldSohailAkhatar gave an indication of his potential as he claimed the silver medal with a best jump of 6.93m. West Bengal’s Amitra Ghosh would be the third athlete on the podium, securing the bronze medal with a jump of 6.90m which was his final jump of the competition. Ghosh was trailing Tamil Nadu’s Mohammad Asief who had a best jump of 6.80m but saved his best for the last to clinch a surprise bronze.