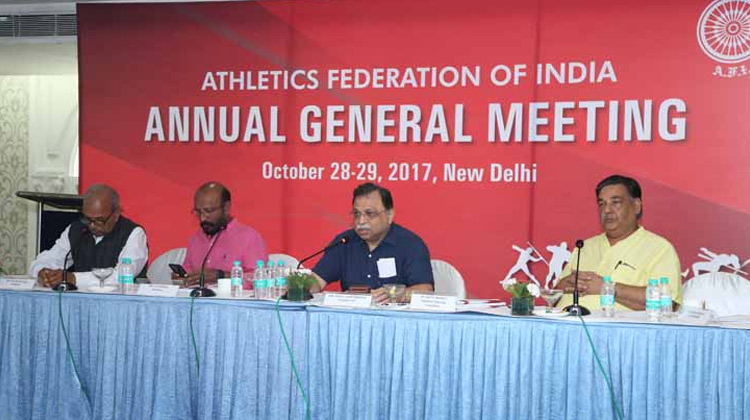 New Delhi. The Athletics Federation of India (AFI) suspended Pondicherry, Manipur and Nagaland state athletics federations for being non-active while Punjab Athletics Association (PAA) was also handed over a three-month suspension for skipping the two-day Annual General Meeting of AFI concluded on Sunday at Hotel Mapple Emerald in New Delhi.

The general body also unanimously passed a resolution directing Maharashtra Athletics Association (MAA) to hold fresh elections within a month for remaining absent from the AGM and poor functioning of the federation affecting the development of athletics in Maharashtra.

“There is no athletics activity in Pondicherry, Manipur and Nagaland and despite telling these state affiliates many times to start development and promotion of Athletics, nothing is being done by them. Punjab is also suspended for remaining absent from the AGM and there were a lot of complaints from Athletes and Coaches the way North Zone meet was conducted in Tarantaran by the PAA on 14-15 October 2017. However, young athletes from districts will be allowed to participate in the National Inter-District Junior Athletics Meet, our flagship developmental program, to be held in Vizag from 24-26 November 2017. We do not want kids to suffer due to the inefficiency of the state unit. The general body felt strict action needs to be taken against such state units. Similarly, members of the house called for fresh elections in Maharashtra,” said Adille J Sumariwalla, President AFI.

The model constitution focused on encouraging more transparency and efficiency in the functioning of state affiliates of AFI was also approved at the AGM.

It was also proposed and approved at the AGM that athletes skipping the national camps will not be allowed to participate in the AFI selection trials for international competitions.

Among other major decisions taken by the general house at the AGM is approval of Qualification Guidelines for Commonwealth Games to be held in Gold Coast, Australia, and Asian Games to be held in Jakarta, Indonesia next year. The house also approved the 2018 Annual Calendar of AFI which is designed keeping in mind the CWG and Asiad 2018.