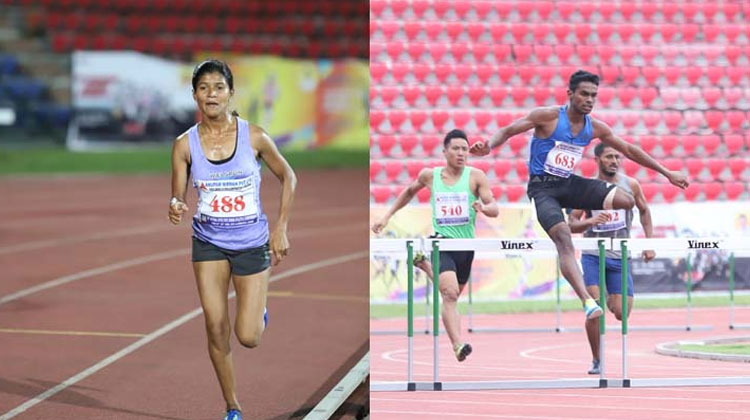 Guwahati. The opening day of the 58th  National Inter State Athletics Championships got off to a fine start with a total of seven athletes finishing inside the qualifying guidelines for the Asian Games 2018 set by the Athletic Federation of India. Another four meet records were set at the Sarusajai Sports Complex in Guwahati on Tuesday in the competition, that is serving as the final selection trials for the Asian Games to be held in August in Indonesia.

Athletes standing on all three steps of the podium at the conclusion of the men’s 400m hurdles went under the selection guidelines laid down by the AFI. National record holder Dharun Ayyasamy was the expected winner, crossing the finishing line first in a new meet record of 49.68 seconds. He erased the earlier mark of 49.91 set by Asian Games gold medalist Joseph Abraham in 2009. However, in what was a fast run race both the second placed Santhosh Kumar of Tamil Nadu and the bronze medalist Jashanjot Singh of Punjab finished under the qualification guideline of 50.10 seconds. Santhosh Kumar clocked 50.64 seconds while Jashanjot recorded a time of 50.64 seconds.

In the women’s 400m event, Jauna Murmu earned the right to improve on her 4th place finish at the 2014 Asian Games by clocking a faster time than the AFI’s qualification standard of 57.52 seconds. The 27-year-old from Orissa, recorded a time of 57.02 seconds. Murmu’s time was a new meet record, eclipsing the earlier mark of 57.52 seconds recorded by Anu Rani at Guntur last year. Finishing in second place was the old meet record holder and defending champion Rani, who clocked 57.68 seconds. The bronze medal was won by Saritaben Gayakwad of Gujarat who ended with a time of 58.01 seconds.

In the absence of the veteran Seema Antil, Commonwealth Games bronze medalist Navjeet Kaur was the favourite in the women’s discus throw event. However, it was Haryana thrower Sandeep Kumari who stole the show winning gold with a best effort of 58.41m. Dhillon had a less than stellar day, finishing third with a best effort of 54.67m behind statemate Kamalpreet Kaur who clinched silver with a throw of 55.47m.

In Women’s 5000m, 20-year-old Sanjivani Jadhav, ran a personal best of 15.38.78 seconds. The qualification standard stood at 15.45.00 seconds. Jadhav of Maharashtra, who had won a bronze in the same event at the 2017 Asian Championships, improved on both her previous best of 15.51:58 seconds as well as the previous meet record of 15.46.92seconds set by L Suriya at the Guntur edition of the tournament last year. Jadhav finished well clear of the field with Parul Chaudhary of Uttar Pradesh and Kiranjeet Kaur of Haryana claimed silver and bronze with times of 16:07.59 seconds and 16:17.15 seconds respectively.

Sarita Singh made up for the disappointment of missing out on the Commonwealth Games by doing well in Guwahati to meet the qualification standard. The hammer thrower recorded a throw of 63.28m, well over the 60m guideline set by the AFI. Sarita also managed to improve on her own meet record of 63.22m set in Guntur last year.

The day would end in disappointment double Asian Championship gold medalist G Lakshmanan who fell just short of the qualification guidelines for the Asian Games. Lakshmanan clocked 13:58.63 seconds as against the qualifying standard of 13:50.00 seconds. Uttar Pradesh runners Arjun Kumar and Suresh Kumar clinched silver and bronze with efforts of 14:06.98 seconds and 14:11.49 seconds respectively.