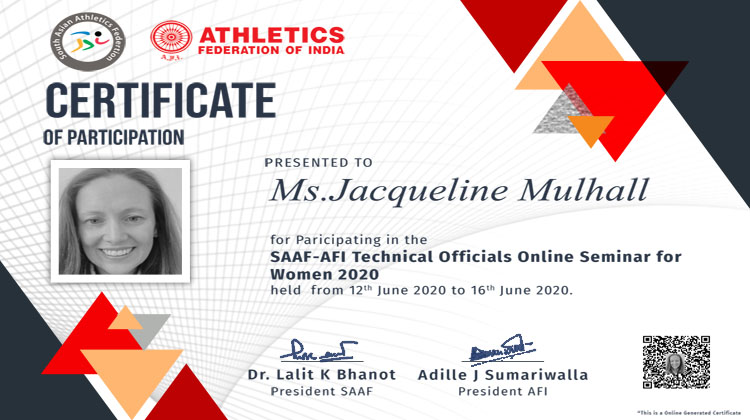 New Delhi, June 28: Athletics Federation of India has made available Certificates of Participation for those who took part in the world’s biggest online seminar for technical officials of a single sport in April this year. Nearly 1000 participants attended the AFI-South Asian Athletics Federation’s joint initiative held from April 25 to 30.

“We are delighted to have led the way in the use of technology for information sharing and advancing knowledge among technical officials. And, in keeping with the demands of the current situation, we are making the certificates available online so that each participant can download his or her certificate against the AFI UID,” said AFI President Adille J Sumariwalla.

“The Technical Officials will simply have to log in to their zone on the AFI website with their respective AFI UID and password to be able to view his or her certificate on the left-hand side on the dashboard and download it,” he said. “The certificate comes with the participant’s photograph and is bar-coded to both lend it a personal touch and prevent misuse.

“At AFI, we have been in the forefront of the use of technology, even in terms of getting all athletes to register themselves with their biometric data to make our processes easier,” he said. “The seminar reduced travel expenses and helped us face logistic challenges even while reaching larger audiences by embracing technology,” he said. World Athletics President Lord Sebastian Coe, who delivered the keynote address on the opening day of the six-day seminar has said athletics would simply not function at any level without the contribution of technical officials “It would be unrecognisable without one of our sport’s most endearing aspects, the enshrining of the volunteer contribution 24×7,” he said.

The seminar was made possible with meticulous planning and execution. It prompted Lord Coe to comment that it was the largest gathering of technical officials that he had ever attended. He was in the forefront of those who praised AFI and SAAF for taking the initiative of engaging technical officials in such a manner.

Besides the Technical Officials seminar participants that made history, in the past few weeks, AFI has conducted a Starters’ Seminar, a Women Technical Officials Seminar, and a Technical Delegates Seminar to ensure that the quality of conduct of athletics meets when competition resumes is of a higher standard than before. AFI also became the first National Sports Federation to hold a special general meeting online.