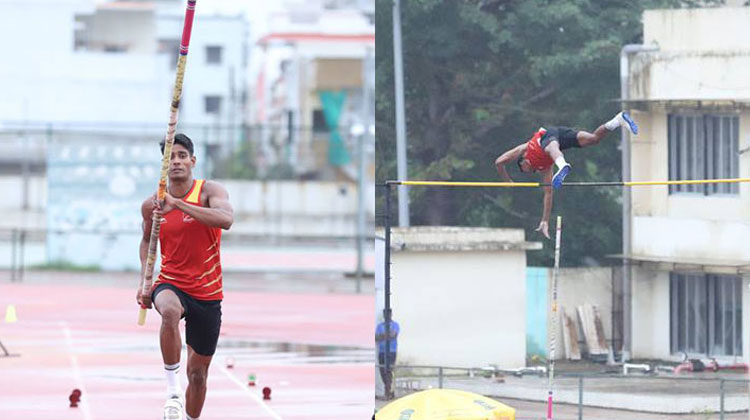 Vadodara.Rakesh Gond was the star performer on the opening day of the 15th National Youth Athletics Championships currently underway in Vadodara, setting a new youth national record in the pole vault competition. Gond, 18 cleared a height of 4.90m to erase both the old meet record of 4.72m set by Dhirendra Kumar in the 2016 edition of the tournament and also the national mark of 4.75m set by Kanhaiya Singh in 2017.

The Uttar Pradesh pole vaulter was far ahead of the rest of the field in the competition, finishing a half meter clear of Shekhar Kumar Pandey who claimed a silver medal with a best effort of 4.40m. Ganesh Priyan of Tamil Nadu trailed even further back but took bronze with a jump of 4.20m.

Meet records were also set in both the men and women’s 2000m steeplechase competition. Md. Noor Hassan of Uttar Pradesh clocked a time of 5:54.37 seconds to smashed the old record of 6.00.28 seconds set by Raj Kumar at the 2016 edition of the tournament in Thehnipalam. The national record in the event belongs to N Ginao Singh who clocked 5:48.90 seconds back in 2000. Also finishing under the old meet record was Atul Gavit of Gujarat who clocked a time of 5:58.13 seconds. Taking the third step on the podium was Manish Sharma of Madhya Pradesh who recorded a time of 6.01.31 seconds.

The women’s 2000m steeplechase saw a similarly fast run race. The competition was won by Uttar Pradesh’s Kajal Sharma who clocked 7:11.99 seconds to eclipse the old meet record of 7:21.23 seconds set by Priyanka in Thehnipalam in 2016. The silver medal would go to Vaishnavi Sawant of Maharashtra who also ran faster than the old meet record. Sawant clocked a time of 7:17.61 seconds. Trailing well behind in third place was local athlete Vandana Mori of Gujarat who recorded a time of 7:37.41 seconds.

Another meet record would be set in the javelin throw competition. The mark Uttar Pradesh’s Rohit Yadav erased though was his own. Yadav threw the javelin 77.41m to go past his own mark and personal best of 76.11 set in Hyderabad last year. Yadav began his competition at the Manjalpur Sports Complex with a throw of 75.67m before registering his best throw in his third attempt. Yadav then made two foul throws before managing another big throw of 76.35m in his final attempt.   Suraj Kumar of Uttar Pradesh took silver with a best effort of 72.77m while Sudama Kumar Yadav of Bihar claimed the third step of the podium with a best throw of 71.06m.

In other events Sunil Singh of Madhya Pradesh claimed the gold medal in the men’s 3000m race with a time of 8.33.57 seconds to beat Ravi Dahiya of Haryana who crossed the finish line in 8:34.43 seconds. Puneet of Haryana took bronze with a time of 8:40.17 seconds. In the women’s 3000m race Ankita Dhyani of Uttarakhand took gold in 10:14.37 seconds beating Pragati Mulane of Maharashtra (10:19.80 seconds) and Muskan Chotiara of Gujarat (10.25.15 seconds) who took silver and bronze respectively.

Aniket Kala of Uttarakhand won the men’s discus throw competition with a throw of 56.26m. He beat out Ikram Ali Khan on Madhya Pradesh who recorded a best throw of 54.63m and Punjab’s Dhanvir Singh who had a best effort of 53.11m on the day.