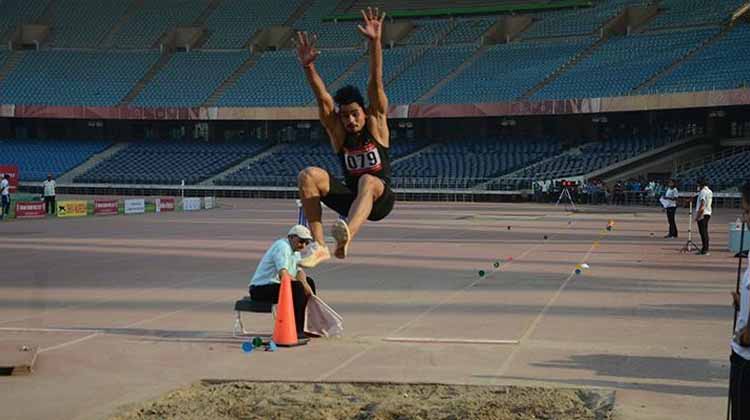 New Delhi: The second leg of the Indian Grand Prix 2017 winded up flamboyantly at the Jawaharlal Nehru Stadium, New Delhi on Thursday evening as top Indian athletes glittered with their performances

Poovamma Raju clocked 52.66s to clinch the gold medal in the Women’s 400m event while Kerala’s Jisna Matthew narrowly missed the gold by 0.01s to settle for the second position with the timing of 52.67s. The bronze medal was snatched by West Bengal’s Debashree Mazumdar (54.00s)

Tamil Nadu’s Santhosh Kumar bagged the yellow medal in the men’s 400m hurdles event clocking 50.64s bettering his previous best of 51.26 which was set at Coimbatore in January. M.P. Jabir finished second to win silver with 51.18s and bronze medal was clinched by Jithin Paul with 51.30s.

In the Men’s 400m event, Rajiv Aroka who also hails from Tamil Nadu clinched the gold medal with the timing of 46. 94s.He could not push himself ahead of IAAF’s Qualification mark of 45.50s. Delhi’s Amoj Jacob grabbed the silver (47.07s) whereas the bronze medal was captured by Sachin Roby with 47.32s.

Odisha athlete Amiya Kumar Mallick who broke the national record in men’s 100m sprint by clocking 10.26 seconds in the semifinals of the 20th Federation Cup Senior Athletics Championships in 2016 won the gold medal with the timing of 10.62s. Safikul Mondal (10.72s) and Shalin (10.81s) grabbed the silver and bronze medal respectively.

Long Jumper, Ankit Sharma who hails from Madhya Pradesh won the gold medal in Men’s Long Jump event with an effort of 7.71m improving his performance of 7.68m at IGP2017 (LEG1) four days ago at Patiala. SE Shamsheer of Karnataka jumped for a distance of 7.63m to win the silver medal and Baljinder Singh of Punjab settled for the bronze with a distance of 7.33m.