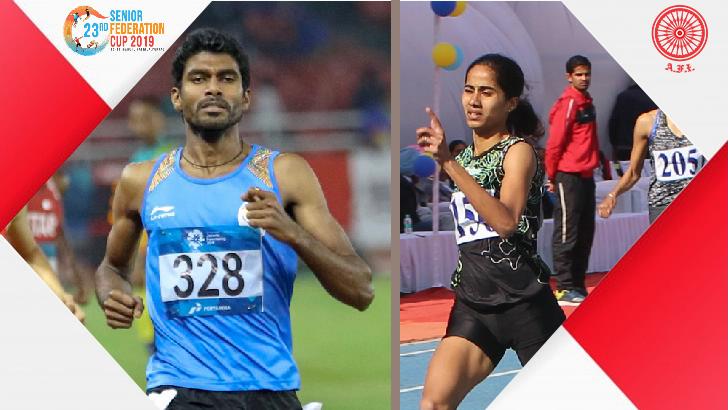 New Delhi. Indian Grand Prix winner VK Vismaya will lead a strong field in the women’s 400 metres event at the 23rd senior Federation Cup Athletics Championships in Patiala. The country’s most prestigious athletics competition will be held at the National Institute of Sport from March 15-18, 2019.

Hima Das, the Asian Games silver medallist and the World junior gold medallist will be a part of a strong field, which includes the likes of Poovamma MR, SaritabenGayakwad, Jisna Mathews, Sonia Baishya and Anjali Devi. All the members of the 4X400 metres relay will be participating in the 400 metres heats, which will take place on Sunday, March 17 at 9.40 am.

The Fed Cup will also be the final opportunity for Indian athletes to qualify for the 23rd Asian Athletics Championships to be held in Doha from April 21-24.

“We expect roughly the same number of medals as that from last Asian Championships held in Bhubaneswar in 2017, about 30. In Patiala, we don’t expect the same performance from Hima Das as her last year’s show at the Fed Cup. She has been busy with her exams and that has hampered her preparations. We expect that the women’s 400 metres will be an exciting contest, apart from the men’s 800 and 1500 metres,” said Athletics Federation of India official RK Radhakrishnan.

The men’s equivalent of the quarter-mile will also witness steep competition, with triple silver medallist from Jakarta, Muhammad Anas Yahiya, leading the pack.

Silver medallist in the 100 and 200 metres at Jakarta, Dutee Chand, will also be the star attraction in the same events at the Fed Cup. Dutee will also likely face off against Hima Das in the 200 metres event. Amiya Kumar Mullick and VK ElakkiyaDasan are among the favourites in the men’s 100 and 200 metres.

The men’s 1500 metres event will witness an interesting three-way contest between Jinson Johnson, Manjit Singh and Asian Athletics Championships gold medallist Ajay Kumar Saroj. Johnson, having pipped to the 800 metres title in Jakarta by Manjit, will compete against him in the same event at the Fed Cup.

The women’s 1500 metres will see upcoming stars Lili Das and PU Chitra try to out-do each other. Maharashtra’s ArchanaAdhav will also provide strong competition to the two runners.

Gold medallist in Asian Championships in 2017, Govindan Lakshmanan will participate in the long distance double of 5000 and the 10000 metres.