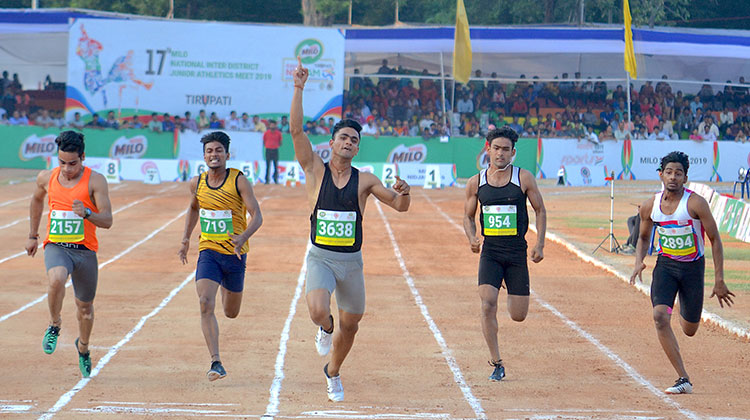 Had he not started celebrating early, Prince Chaudhary may have secured the meet record for himself rather than only share it with KshitijBhoite (Thane) who clocked 11.06 seconds in Ranchi six years ago. Jitin Chaudhary (Bhind), who finished second, was disqualified as the report of the medical tests that he had undergone a day earlier arrived and he was declared over-age.

Karimnagar’s AmirishettiTharun, who was second fastest in the first round but qualified for the final only as the eighth fastest after he was hampered by a muscle pull in the semifinals, was moved up to the second place with a time of 11.31 seconds, one hundredth of a second ahead of Reasi’s Vasu Sapolia.

Nasik’s Aishwarya Prajakt More, who has been training less than two years, strained every sinew to gain a slight edge over Bengaluru Urban’s Neole Anna Cornelio over the final 10 metres and win by two-hundredths of a second. The wispy and bespectacled victor as well as Neole Cornelio made the most of a better start than Thane’s Reshma Gajanan Gore, fastest in qualifiers.

There was considerable interest at both the high jump and long jump pits where Bengaluru Urban’s Pavana Nagaraj (1.61m) and Shaili Singh (5.88m) ruled the roost in the girls under-16 competition. Daughter of Olympian high jumper Sahana Kumari, Pavana made a game bid to secure the meet mark by asking for the bar to be raised to 1.66m but was done in by apprehension about the runway.

Shaili Singh and her rivals braved underfoot conditions that did not afford them the grip they were looking for to reach the acceleration approaching the take-off board. With 5.76 and 5.88 on her third and fourth jumps, she secured the title. Churu’s Susmita made a gallant last-ditch attempt and reached 5.40m to win the silver medal from Lakshmi Gemmala (Vizianagaram).

Mysuru’s Likitha Yogesh won the girls under-16 discus throw final with a best effort of 37.41m. She had topped the qualification on the opening day with a best of 37.92m. The 15-year-old said she turned in long hours at training to improve from 32.20m in South Zone Meet in Udipi in September and 31.44m in the National Junior Athletics Championship in Guntur earlier this month.

With a time of 26.16 seconds in the girls under-16 200m heats, Sharon Maria (Nilgiris) broke the meet record of 26.28 set by Madhumita Deb (West Tripura) in Visakhapatnam two years ago. Chandigarh’s Simran Kaur replicated Sharon Maria’s time in another heats to claim a share in the meet record.