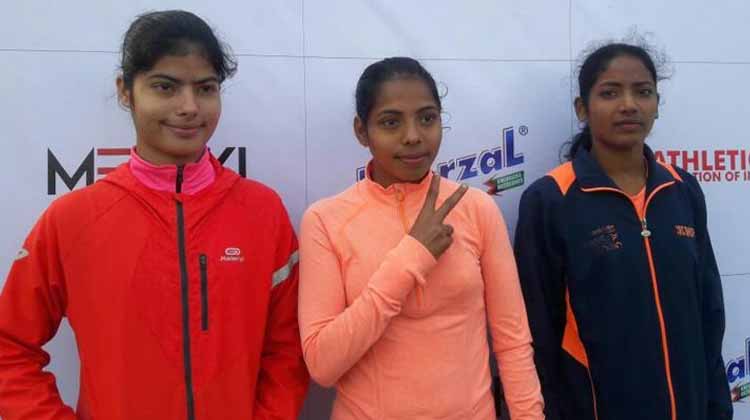 New Delhi, Feb 17: Priyanka Patel shattered a 14-year-old record in the girls 10km walk at the 5th National Race Walking championships in New Delhi on Saturday when she crossed the finish line in 49:01:81 seconds. Patel, a second year college student who currently trains at SAI Bhopal beat the old mark of 49:16:51seconds set by Priyanka Goswami in 2004. Patel finished over two minutes ahead of Bandana Patel who clocked 51: 23:52 seconds to take second second place in the first racewalking event of the year. Ramandeep Kaur of Punjab took bronze in 52:12:18 seconds.

For Patel the gold medal in the U-20 event was particularly significant. “This is the last time I will be taking part in the 10km event. From now on I will be taking part in senior competition so I will be only competing in the 20km event in the future. So to win a gold medal in my final competition in this event is special,” says Patel who says she will next compete in the Federation Cup in March this year.

While Patel swept past an old record, Olympian Sandeep Kumar came ever so close in breaking the old mark. Kumar completed the 50km walk in 3:56:39:71 seconds. In doing so, Kumar fell short of his own national record of 3 hours and 56 minutes. The mark was also just shy of the guideline of 3:55:00 set by the Athletics Federation of India to qualify for the Asian Games later this year.

Kumar who competed at the 2016 Olympics in the 50km event despite also qualifying in the 20km event, was satisfied with his performance. “I am happy with how I did today. If I had got better competition, I could easily have taken another 1 or two minutes from my mark. In international competitions, you have competitors who push you and you also are given a pace setter through a motorcycle. Even if you remove just 1 second every lap you could make a big difference in your final time,” he says.

AFI general secretary CK Valson added that though Kumar’s performance while just short of the AFI’s own standard, he would still be considered for the Asian Games. “The standard is a guideline and it is also a very good time considering he didn’t have a lot of competition,” he said.

Kumar is not looking that far. “My next competition is the Team Racewalking World Cup (in Taicang, China) in May. India has to send a team of five players and I think I can improve my timing there,” he says.

Kumar will likely be joined in Taicang by compatriots Jitendra Rathore, who clocked 3:58:55.82 seconds to take silver and Damen Singh who claimed bronze with a personal best time of 4:00:34:48 seconds.