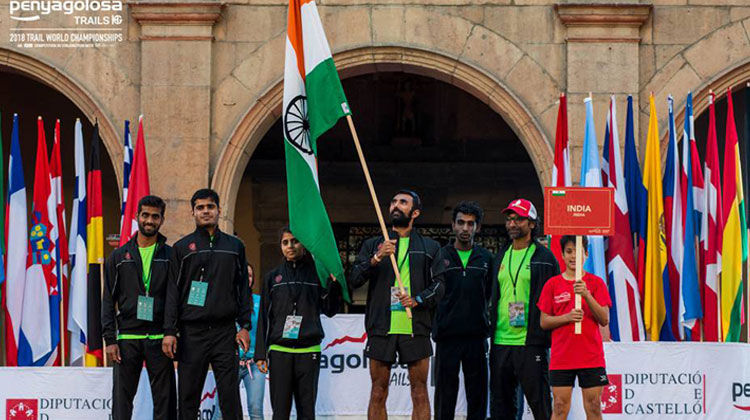 On 12th May 2018, Penyagolosa, Castellón de la Plana in Spain, was witness to 331 runners from 49 countries, which included 198 men, and 133 women who gently tread their ‘Trails’ at the 8th World Trail Championships. India was not to be left out and was represented by Ullas Narayana, Lokesh Meena, Ajit Narwal, Sampathkumar, Kieren Dsouza and Aakriti Verma.

Ullas and Kieren who had represented the country at the 2017 World Championships, wonderfully improved on their previous performance with Kieren moving into the top 100 (98th position) from a placing of 195th last year in a time of 10 hours 59 minutes, while Ullas moved up from 143rd to 118th position. Sampathkumar finished in 13 hours 25 minutes and the team positioned at 26th out of 34 teams. While Ajit completed the race 13 minutes after the cutoff of 15 hours, Lokesh and Aakriti pulled out earlier.

Luis Alberto Hernando of Spain is the third time ‘King of the Trails’ having completed the race in 8 hours 38 minutes; while ‘the Queen of the Trails’ Ragna Debats of Netherlands topped in a time of 9 hours 55 minutes.  The team event is made up with the consolidated timings of the top three finishers from each country. Team Spain, both men and women were on top of the charts.

Trail running is understood by a ‘handful’ of runners and a couple of Race organizers in India. However, the sport is growing and fast. The race was technical, and for the Indian runners it was a great experience. When asked what was technical about the trail, Kieren said, “the trail was very steep in many places, while some parts had loose pebbles and others big boulders. So one had to be a mountain goat to run down these slopes which could have been disastrous for the runners.”

The participation of the Indian Team is athlete funded event. The athletes had to pay for their travel while the AFI ensured their accommodation. AZANI SPORTS came forward to provide the team with kit and UNIVED provided the nutrition supplements and hydration for the team. Support crew is most essential at an ultra event, and this year Renu Narwal and Kapil Malik (thanks to Ajit Narwal), provided the much need succor to the team.