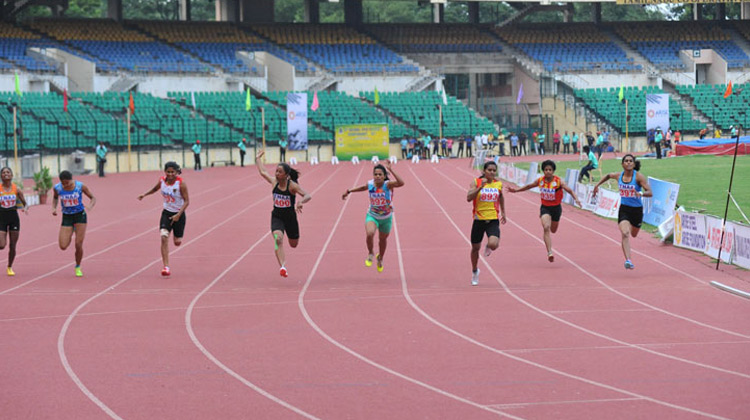 Chennai: In what was an action-packed day here at the 57th National Open Athletics Championships, a total of 11 finals for various events were completed throughout the day, with plenty of medals up for grabs. At the end of day-2, Railways lead the points table with a total of 125 points, followed by Services’ (81 points) and ONGC (36 points).

Navjeet Kaur of the Railways’ took home a gold medal by a fair margin in women’s shot put with an effort of 15.23m. ONGC’s Kachnar Chaudhary (14.11m) and Haryana’s Rakhi Sangwan (13.76m), secured the second and the third spot, respectively.

Purnima Hembram, who grabbed a gold in women’s pentathlon at the recently concluded Asian Indoor and Martial Arts Games at Ashgabat, Turkmenistan, won a gold for Railways’ in women’s 100m hurdles with a timing of 13.89 seconds. Jharkhand’s Anurupa Kumari (13.98 sec) won silver, and Railways’ Somiya (14.32 sec) won the bronze.

The gold in men’s 110m hurdles was won by national record holder Siddhanth Thingalaya (ONGC) with a timing of 14.06s. Services’ Akhil Johnson (14.20 sec) came in second, and Railways’ A. Suresh (14.23 sec) finished with a close third.

The gold and the silver in men’s javelin throw were won by Services’ Davinder Singh Kang (75.12m) and Abhishek Singh (74.19m), respectively. Punjab’s Sunil Bishnoi settled with a bronze with a distance of 74.03m.