Rohit Yadav catches the eye with under-18 National javelin record 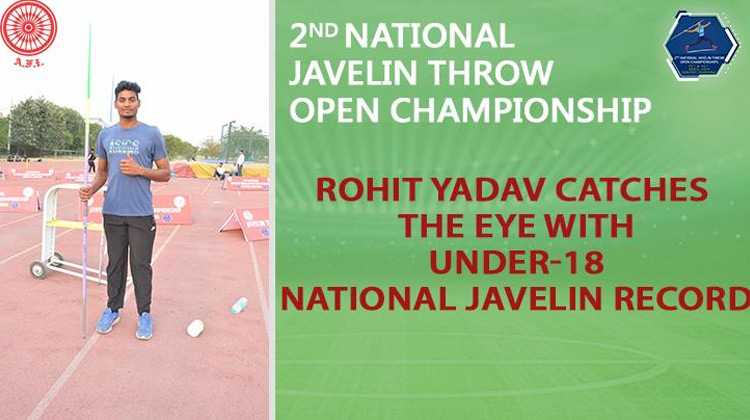 Sonipat, April 15: Rohit Yadav (Uttar Pradesh) caught the eye with an under-18 National record throw of 81.75m in the boys under-18 preliminary round in the second AFI National Javelin Throw Open Championship at the SAI Regional Centre here today. The final will be held on Tuesday morning. Yearning to return to centerstage, he expressed himself with the 700gm javelin today.

The 17-year-old from Jaunpur improved on the National record of the 79.29m for boys under-18 set by Mohammed Hadeesh Apia in September 2015. He also has a recorded throw of 79.83m in the SGFI National School Games in Nadiad, Gujarat, in February this year. But he knows he will have to step up to realise his dream of competing in the Olympic Games in 2024.

The Haryana women trio of Poonam Rani, Monica and Shilpa Rana swept the women’s medals with distances of 49.53m, 42.46m and 39.89m. Poonam Rani, the 24-year-old from Jhajjar, has a clutch of All-India Inter-University crowns and has thrown over 50m and sought hard to breach that mark but had to settle for being nearly half a metre short.

With coach Uwe Hohn and biomechanics specialist Dr. Klaus Bartonietz keenly watching the scores of javelin throwers who turned up for the championship from around the country, it seemed natural that the intensity of competition was high and that there was an eagerness to showcase raw talent.

Meanwhile in the second AFI National 400m Open Championships, it was a teenager sprinter Vikrant Panchal (Haryana) who forced the limelight to be trained on him with a time of 48.06 seconds in the boys under-20 preliminary semifinals. It was the second time in the day that he breached the 49-second mark, having clocked 48.40 seconds in the preliminary heats.

Haryana’s Pankaj Malik, 21, clocked the fastest time in the men’s semifinals. His time of 48.54 seconds was better than the 48.97 clocked by M Ramachandran (Tamil Nadu), for long a familiar name in the Indian circuit, in the other semifinals heats. Gujarat’s Vishal Chaturbhai had set the pace in the prelims with a time of 48.66 seconds.