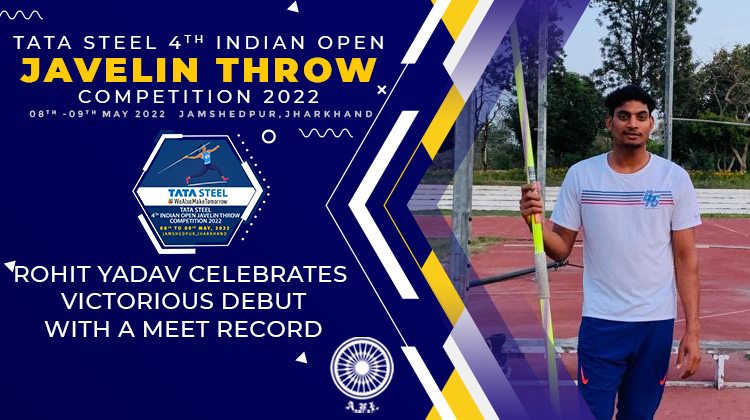 Jamshedpur, May 9: Rohit Yadav (Uttar Pradesh) brooked no competition in claiming the men’s crown in the Tata Steel 4th Indian Open Javelin Throw Competition at the JRD Tata Sports Complex here tonight. In the process, he claimed the meet record on his senior debut in the competition.

Three of his six throws, including the winning distance of 78.31m, were better than the best that Sahil Silwal (Haryana) was able to produce on Monday. It was the fourth time in-a-row that Rohit Yadav finished ahead of his rival from Haryana. each of his efforts went past the erstwhile meet record.

The 20-year-old Rohit Yadav broke Davinder Singh Kang’s 2019 mark of 74.28m with his opening throw and rewrote it with each if his next two attempts. Of course, holding the seventh rank in the all-time list of Indian javelin throwers with a best of 81.83m in the Federation Cup in Kozhikode last month, his bid to reach the 80m mark did not meet with success.

The left-handed Sahil Silwal, who breached the 80m mark in March last year, was unable to find rhythm. The 21-year-old came up with a throw of 74.49m on his fifth try and a best of 76.64m on the final attempt. Coming in the wake of 72.50m in the Indian Grand Prix 2 and 73.5m in the Federation Cup earlier this year, he will be happy he marked an improvement.

Rohit Yadav brought the curtain down on the first National-level track and field competition in the Steel City since 2007 with his third win in four top competitions at home this season. In other events this evening, Haryana’s Aditya and Uttar Pradesh’s Archana Yadav won the Boys U16 and Girls U18 titles.