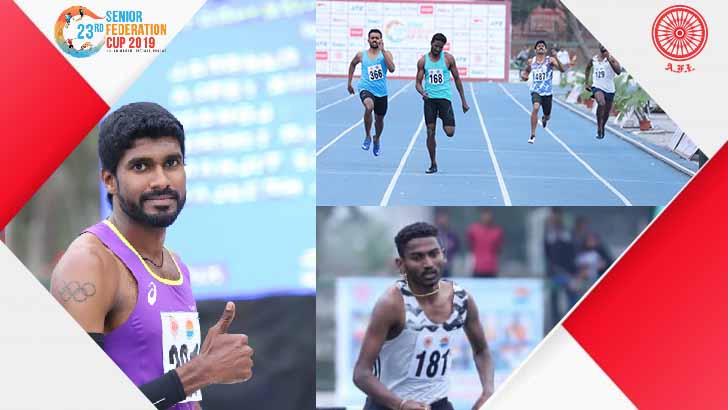 Patiala. Avinash Sable was the star of the show on the final day of the 23rd Federation Cup, as he smashed the national record in the 3000m men’s steeplechase competition. The 25-year-old Sable stopped the clock at the athletics track at the National Institute of Sport in Patiala, in 8.28.94 to erase his own national record of 8.29.80 that he had recorded just six months ago in Bhubaneswar.

Sable’s effort was more than enough to secure him a spot in the Asian Championships where the Athletics Federation of India’s guidelines were set at 8.35.00. His time was good enough to cross the qualification mark for the IAAF World Championship in Doha to be held in September-October 2019 for which the qualification standard was set at a challenging 8.29.00.

Sable was happy about his new record as he hadn’t expected to break his existing one. “I was expecting to run in 8.35.00 but I am happy that I was able to set a new national record. I will try to do even better in the future,” Sable said after his win.

Sable’s pace also helped compatriot Shankar Lal Swami for the latter was able to attain the AFI’s qualification guideline. Swami finished in second place with a time of 8.34.66. That too was faster the existing meet record of 8.42.19 that was set by Naveen Dagar at the same venue last year. Durga Bahadur Budha of Uttarakhand took fourth place with a creditable time of 8.46.09.

While Sable’s was the standout effort, there were many other performances of note on a day when a total of seven athletes met the qualifying standard for the Asian Championships to be held next month.

Asian Games gold medalist in the 1500m Jinson Johnson won the Federation Cup gold over the same distance. He clocked a time of 3.41.67 to finish well under the AFI qualification guideline of 3.46.00 for the Asian Championships. Johnson was followed closely by Uttar Pradesh athlete Ajay Kumar Saroj, who clocked a time of 3.43.57. That effort by Saroj was enough to earn him the right to defend his gold from the 2017 edition of the Asian Championships that was held in Bhubaneswar. Also finishing under the AFI qualification guideline was Uttar Pradesh athlete Rahul who stopped the clock at a time of 3.44.94.

Arokia Rajiv also assured himself of a spot on the Indian team that will travel to the Asian Championships, by winning the men’s 400m race in a time that met the AFI’s qualification guideline. Rajiv produced a mini upset by beating the national record holder Muhammad Anas over the quartermile. Rajiv clocked a time of 45.73 to finish 0.12 under the AFI qualification standard of 45.85. Anas, who was not looking at his best finished just outside the qualification guideline with a time of 45.89. While Anas claimed the silver medal, fellow Kerala athlete Kunhu Muhammad clocked 46.47 to claim the third step on the podium.

Also assuring herself of a spot in the Asian Championships was Swapna Barman the defending Asian Games gold medalist in the women’s heptathlon. Barman had a relatively slow 800m race to finish her competition but her total of 5901 points was more than enough to meet the AFI qualification guideline of 5800 points. Barman was followed by Odisha’s Purnima Hembram who recorded a total of 5597 points. The bronze medal was claimed by Tamil Nadu’s M Sowmiya who recorded a total of 5292 points.