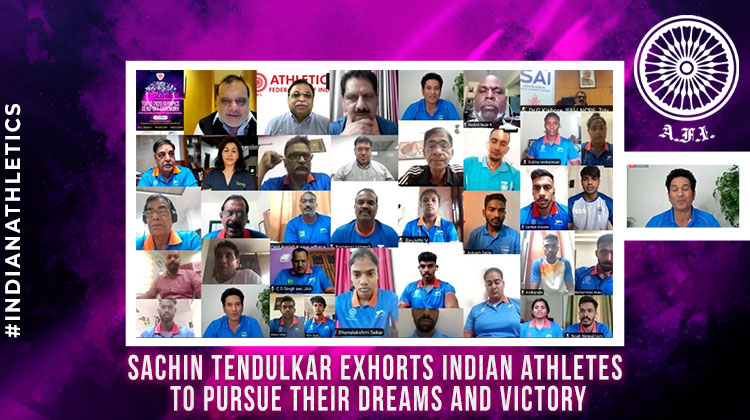 New Delhi, July 20: Legendary Sachin Tendulkar exhorted the Indian athletics contingent heading to the Olympic Games in Tokyo to chase their dreams of winning medals for the country. “Pressure will be your constant companion, but you have raised the expectations with your performance,” he told the 26 athletes in a virtual send-off ceremony.

“You have worked hard in these difficult times. And if nobody has any expectations of you as an athlete, you are in the wrong place. You will have heard that winning and losing are part of sport. Let us win and let the others lose,” he said. “When you wear the medal, see the Tricolour go up and hear the National Anthem, it will be the biggest moment of your life.”

In an inspirational address, Sachin Tendulkar recalled that when he was recovering from a tennis elbow and a shoulder surgery in 2004-05, he realised during practice in England that international athletes sometimes forget the primary reason they set out to play sport. “It is a love for the game. I had to wake up the kid in me and bring him alive,” he said.

Indian Olympic Association President Dr. Narinder Dhruv Batra, who joined the ceremony from Tokyo, said he believed Indian athletics is on the cusp of winning that elusive Olympic medal. “I have seen the hard work by the Athletics Federation of India, and I know that athletics medal is not very far,” he said, encouraging the 47-member track and field squad.

After a welcome by Athletics Federation of India Senior Vice-President Anju Bobby George, AFI President Adille J. Sumariwalla said the 26 athletes has earned the honour of representing the country on the biggest stage, but also had the responsibility to deliver their best performances and make India proud.

AFI Planning Commission Chairman Dr. Lalit K. Bhanot, who thanked the Government and the Sports Authority of India for the unstinted support before and through the pandemic, said he was hopeful that the best prepared Indian squad would be able to bring home medals from the Olympic Games this time.

The send-off ceremony was presented by Ageas Federal and supported by NEB Sports.