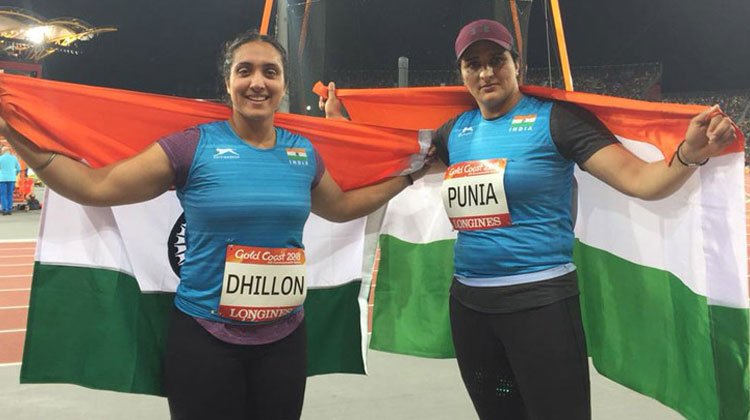 Punia’s silver was her fourth consecutive medal at the Commonwealth Games. She had earlier won a silver at the 2006 edition in Melbourne, a bronze at the 2010 Games in Delhi, a silver at the Glasgow Games before her podium finish at Gold Coast. Punia, 34, threw the discus to the silver medal winning distance in her very first throw of the competition.

She failed to improve on that first effort of 60.41m. Punia recorded throws of 59.57m in her second attempt, a foul throw in her third, an effort of 58.54m in her fourth followed by another foul and a final effort of 58.90m. It was short of her seasons best of 61.05m recorded at the Federation Cup last month and of her personal best of 64.84m recorded 14 years back in Kiev. Neither of those efforts would be enough overcome Australia’s Dani Stevens who flung the discus a massive 68.26m for a new Games Record.

While Punia won her fourth medal, Navjeet Kaur Dhillon won her first ever medal at the Commonwealth Games. It was a medal won right at the brink of defeat. As she stepped up to take her final throw of the competition, Dhillon was trailing in fourth place with a best throw  56.22m, nearly a meter short of New Zealand’s Sositina Hakeai who had thrown 57.16m. Dhillon though managed to record a throw of 57.43m with her very final attempt to pip the Kiwi. It was the biggest senior international medal won by Dhillon, who four years earlier had joined Punia as one of only two Indian women to have won a World junior medal.

There was disappointment in store for the other two Indian women competing for a medal at Gold Coast. Long jumpers Nayana James and V Neena had poor days finishing 12th and 10th in the field of 12 athletes in the final. James, who had a personal best of 6.55m could only record a best jump of 6.14m in her three attempts. The effort would have been particularly disappointing for James had recorded a jump of 6.34m simply to qualify for the final a couple of days ago. It was a similar story for Neena also. The athlete had a personal best jump of 6.66m but could only clear 6.19 on Thursday. That jump too was short of her effort of 6.24m to qualify for the final.

CK Valson, Secretary AFI, said from Gold Coast, “We are extremely pleased with Seema and Navjeet’s performance today. We expected a medal in Women’s discus throw and we got two. We are also very happy with the results of Mohammed Anas and Hima Das in 400m events,”

“However, results were not satisfactory in Women’s long jump event. Both athletes (Nayana James and Neena Verakil) were expected to do better. There are still few events left such as Men’s Javelin Throw and Triple Jump in which we can expect a medal each,” said Valson.

The day however ended with the promise of better fortunes on Friday. After Four events on Thursday, Heptathlete Purnima Hembram was in sixth place with 3441 points. Purnima Hembram recorded a recorded a  time of 13.56m in the 110m hurdles for 1041 points, jumped a height of 1.72m in the high jump for another 879 points, threw the shot put 11.75m for 645 points before then clocked 25.12 seconds in the 200m for 876 points. With three events remaining – long jump, javelin throw and the 800m – Hembram will be hopeful of climbing up from her position and even perhaps recording a personal best.