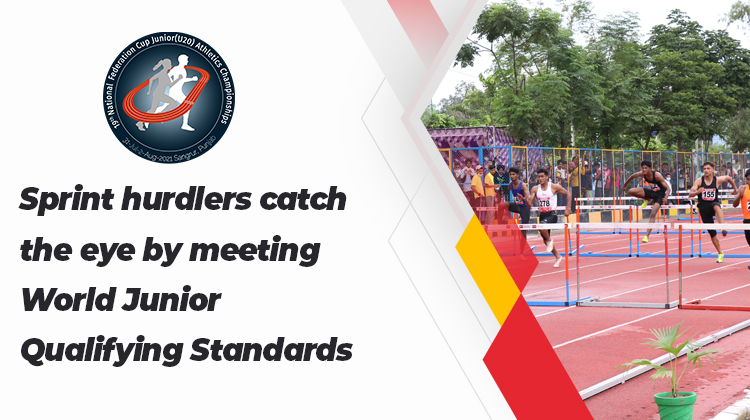 Sangrur, Aug 2: There were heart-warming performances by men and women sprint hurdlers in the National Federation Cup Junior U20 Athletics Championships in the War Hero Stadium here on Sunday as they attained qualification standards for the World Junior Athletics Championships, scheduled for Kenya later this month.

Tejas Ashok Shirse (Maharashtra) won the men’s 110m hurdles in 13.78 seconds after having set a new National U20 Record in the heats with a time of 13.74 seconds, eclipsing the mark of 13.92 seconds set by Yashwant Kumar in Guwahati in February this year and the meet record set at 14.00 seconds by Vikas Khodke in the last edition in Bhopal earlier this year.

A Graceson Jeeva (Tamil Nadu) who finished runner-up in 14.09 seconds and the third-placed Mohit (Haryana), who ran 14.09 seconds in heats were the others who met the qualifying standard set at 14.15 seconds.

In the women’s 100m hurdles, Nandini Agasara (Telangana) and Ann Tomy (Kerala) surged past the qualifying standard of 14.15 seconds, finishing the final in 13.96 second and 13.98 seconds respectively.

Kunwer Singh Rana (Punjab) and Jay Kumar (Uttar Pradesh) qualified in men’s Javelin Throw with distances of 74.75m and 70.93m against the benchmark of 69.50m

In other notable performances on Sunday, Punjab’s Amandeep Dhaliwal (Punjab) came up with two efforts over 19m, winning the men’s Shot Put with a best of 19.15m while Amit won the 10,000m walk in 43:31:50, Ashraf Ali (West Bengal) claimed the high jump with a winning effort over 2.09m and R Sakthi (Tamil Nadu) won the Pole Vault clearing 4.50m.