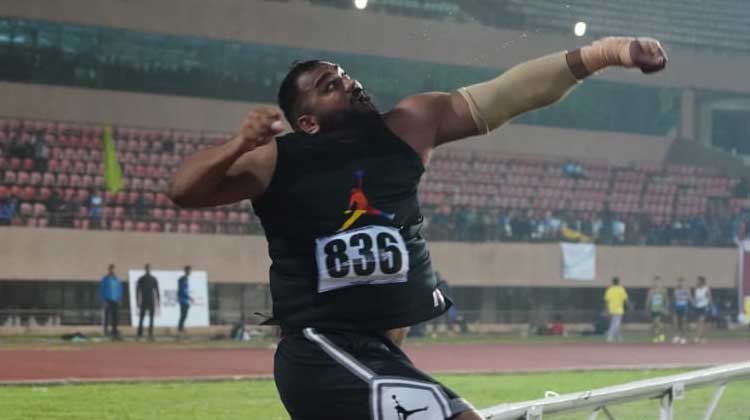 After a half-hour delay caused by heavy rain, the 25-year-old warmed up with a put of 20.41m, just 2cm short of his season’s best that he managed in the IAAF World Championships in Doha on October 3. He followed that up with a 20.29m effort before uncorking the biggest throw yet by an Indian and raising his arms aloft in triumph as soon as he knew he had got a new National mark.

On his subsequent visits to the circle he egged himself on to try and get 21.10m – the Olympic Games qualifying standard set by the International Association of Athletics Federations. But without getting the distance he desired, he chose to get the red flag raised. Though he would have liked this to come at the IAAF World Championships in Doha, he was pleased with the effort.

Tajinder said, “I was in good rhythm today. I was aiming 21.30-21.40 and it crossed that I think in the last throw but unfortunately it was a foul. I will try again to qualify for Olympics at the World Military Games in Wuhan, China later this month. It will be a good competition at Wuhan.”

Noah Nirmal Tom and VK Vismaya claimed the blue riband 400m titles for men and women respectively as evidence of their rising stature among India’s consistent quarter-milers. Noah Nirmal Tom, 25, won the men’s final from Amoj Jacob and KS Jeevan – his team-mates in the Indian 1600m relay squad – with a time of 45.88 seconds, only his second sub-46-second run.

The 22-year-old Vismaya’s time of 52.71 seconds was her fifth fastest, having clocked 52.12 In the Josefa Seckare Memorial in Brno on August 28. With Jisna Mathew (Kerala) not finishing the race, Vismaya beat two challengers from Haryana. The 19-year-old Kiran was two-hundredths of a second behind Vismaya, comfortably edging out Anjali Devi Kundu to the second place.

The home State’s Priyanka Kerketta won a tough women’s long jump battle with a 6.16m effort. She endured stiff competition from Railways Rintu Mathew, whose final two jumps were over 6m and gave her the silver medal ahead of team-mate Neena Varakil. However, Priyanka Kerketta gave herself an early birthday present with leaps of 6.11m and 6.16m on her last two attempts.

Earlier in the morning, Railways’ Bhawna Jat won the women’s 20km race walk with a new meet record to boot. The 23-year-old clocked 1:38:30.00 to lower the 1:39:30.40 mark set by Deepmala Devi in New Delhi way back in 2006. Ravina (Haryana) and Sonal Sukhwal (Rajasthan) finished second and third respectively.