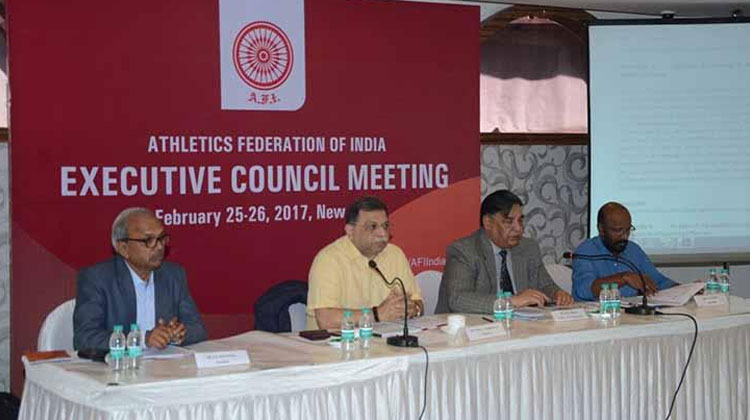 Adille J Sumariwalla, AFI President, said after the conclusion of proceedings at the day-one of the meeting, “We will meet Honourable Chief Minister of Jharkhand and Honourable Minister of Youth Affairs and Sports Mr. Vijay Goel in coming days to discuss preparations of the Asian Athletics Championships 2017. It will be the biggest athletics event of the year for us as 45-member federations of Asian Athletics Association will be taking part in the competition and we are determined to host one of the most successful continental championships in India.”

Embracing the idea of good governance to bring more transparency and accountability in the functioning of its affiliated member state associations, the AFI Executive Council also discussed in detail and approved for amendments in the constitutions of various state associations. The affiliated members are also directed to mandatorily set-up Women Anti-Harassment Committees and formation of Grievances Redressal Cells.

In another major decision taken on Saturday, the Executive Council also approved that only those athletes attending the National Camps or approved National Training Programmes will be eligible to represent the country at international levels. The Executive Council’s decision is a fallout of poor performances of Indian athletes at the 2016 Rio Olympics who were not in approved training programmes but were selected on the basis of one-time sterling performances during trials and never repeated their best performance later at any stage. The Executive Council unanimously agreed that athletes who are monitored within the system should only be eligible for selection to represent the country at international level.

In respect its most ambitious project, the annual National Inter-District Junior Athletics Meet (NIDJAM), one of the biggest grass-root development sports programme in the country, the Executive Council decided that strict action will be taken against all such districts which fail to send teams in the future NIDJAM meets. In all, 316 districts participated in the 2016 NIDJAM meet held in Vishakhapatnam in November last year. The junior programme which provides U16 & U14 boys and girls a direct chance to compete at the National-level is going on non-stop since 2003.

“NIDJAM is our flagship programme. The aim is to take athletics to every corner of the country and state units needs to work hard. They should ensure every district participates in this junior meet. The districts which fail repeatedly to participate in this programme will be calling for strict action against them as we want to tap talent from every part of the country and provide everyone a chance to practice athletics,” said AFI President.

On the Sunday, the second and concluding day of the Meeting, a few more important decisions are expected to be taken by the Executive Council.