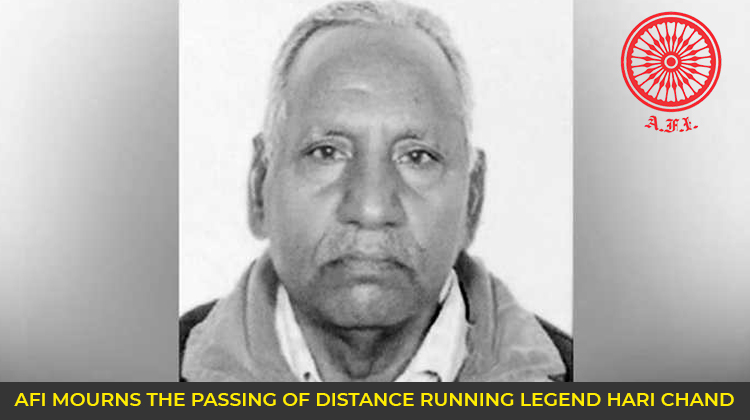 AFI President Adille J. Sumariwalla led the condolences. “Hari Chand, my team-mate in the 1980 Olympic Games, is a legend of Indian sport. It saddens me and the entire fraternity that he has passed. It is a loss to the community as well. AFI and the athletics community pray for Hari Chand’s soul to attain peace and extend our deepest sympathy to the family,” he said.

“It is a tribute to his determination that he was able to set a National Record in the Olympic Games. He knew that getting a place in the 15-man final was going to be tough and pushed himself, despite running barefoot, to get the time he did,” said Mr. Sumariwalla. “Along with Shivnath Singh, he played a big role in sustaining the popularity of distance running.”

Hailing from Ghorewaha village in Punjab’s Hoshiarpur district, Hari Chand pursued his passion for running – his father, Mr. Jaggu Ram, is said to have desired him to join an akhara and become a wrestler – and surfaced at the National level for the first time in the National Junior Athletics Championships in 1970 where he won the 3000m.

Coaches like JS Saini and Jagmohan Singh were impressed with his natural talent and encouraged him. He joined the Central Reserve Police Force as a Head Constable to train with a bunch of good runners. He was short statured but had endurance and speed to run tirelessly over long distances.

It was not long before his famed rivalry with Shivnath Singh came to the fore and held the attention of athletics fans around the country. Hari Chand beat Shivnath Singh to the 10000m gold medal in the Asian Track and Field Meet in Seoul, winning in 14:02.4. He also won the 5000m bronze medal.