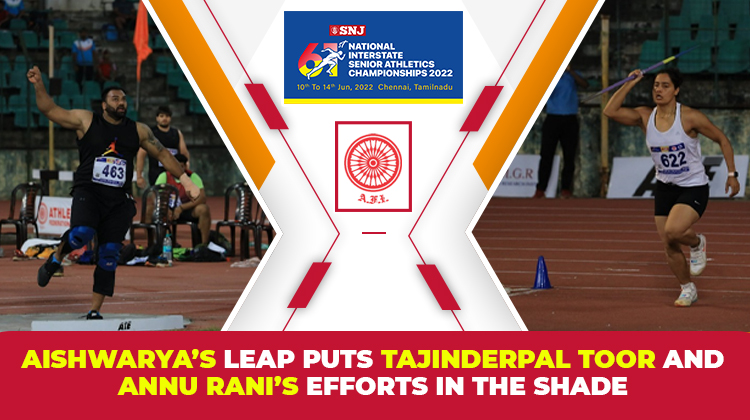 Chennai, June 12: Karnataka Long Jumper B Aishwarya’s explosive effort in the qualifying round put solid efforts by Shot Putter Tajinderpal Singh Toor (Punjab) and Javelin Thrower Annu Rani in the shade on the third day of the SNJ 61st National Inter-State Athletics Championships at the Nehru Stadium here on Sunday.

Aishwarya produced a stunning 6.73m leap in the women’s Long Jump qualifying round for a new Meet Record. Other familiar names like Ancy Sojan and Nayana James (both Kerala) and World U20 silver medalist Shaili Singh (Uttar Pradesh) also made it. to the final without fuss.

The 24-year-old Aishwarya’s effort pitchforked her to the second place on the Indian all-time list behind Anju Bobby George who set the National Record at 6.83m in the Athens Olympics in 2004 and backed it with a 6.75m effort to win the World Athletics Final in 2005. She took over the meet record from Mayookha Johny, who had pegged it at 6.63m in 2011.

Tajinderpal Singh Toor’s search for 20m puts ended on Sunday evening when he was able to send the iron ball past that mark three times. Despite registering no marks on two visits to the circle, the 27-year-old Olympian came up with three efforts over 20.14m, 20.29m and 20.34m to fine form and run out an easy winner.

Uttar Pradesh’s Annu Rani, India’s only woman Javelin thrower in the 60m club, had only two legal throws on Sunday but the second of those was over 60.93m. She has thrown the spear farther twice this season, but she will be happy that she has regained the consistency that she had embraced in the rup up to the Olympic Games last year.

There was a shock in store for Andhra Pradesh’s 100m Hurdler Jyothi Yarraji, who made waves with a series of good races overseas during which she took ownership of the National Record with a 13.04-second effort in the Netherlands. She did not find the rhythm, knocking a couple of hurdles down and tumbling on to the track after crashing into the final hurdle.

Tamil Nadu’s C Kanimozhi won the event in 13.62 seconds, becoming the second fastest Indian in the event this year. Jyothi Yarraji has the top six times and Kanimozhi improved her season’s best from 14.07 seconds to rise to the second spot behind the National Record holder and above the likes of Nandini Agasara (Telangana) and Aparna Roy (Kerala).