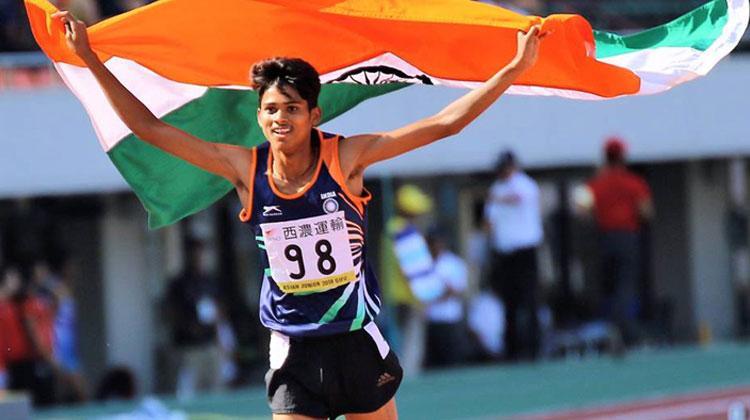 All eyes will be on Junior Asian 800m champion Anu Kumar at the Asian Area qualification leg of the 2018 Youth Olympic Games that will be held in Bangkok, Thailand on the 4th and 5th of July. Kumar is one of a contingent of 21 athletes – 10 men and 8 women —  who will be looking to secure qualification to the youth Olympics that will be held in Buenos Aires in October this year. A total of 89 quota places are up for grabs in the tournament in Thailand.

Competing in the 800m, Kumar will have to be on his best as only the top two finishers will qualify for the Youth Olympics. He will however be confident of his chances at the Thai Japan Bangkok Youth Center.  Kumar is in strong form, having won a gold medal at the 18th Junior Championships in Gifu, Japan last month. He had won that continental tournament clocking a time of 1:54.11 seconds. That win was only the latest prize won by the 16-year-old from Uttarakhand.

Kumar, one of the brightest prospects in middle distance running in India, had won a silver medal in the 800m at the World School Games in France and had clocked a personal best time of 1:50.60 to take gold at the Junior Federation Cup in April this year.

Also traveling to Bangkok will be Kumar’s compatriot Sreekiran Nandakumar who will also be hoping for better luck than the kind he had at the Junior Asian Championships in Gifu. At that tournament the Tamil Nadu based Nandakumar had qualified for the final of the 800m with a time of 1:54.51 seconds but had been unable to take part in medal race after suffering what the team manager had said was a severe migraine. Nandakumar though will be especially motivated in Bangkok and will look to get the better of Kumar, who had pipped him to second place at the Junior Federation Cup in April this year.

Also looking to impress would be sprinter Nisar Ahmad. The 16-year-old sprinter from Azadpur in New Delhi first broke out when he broke the national U-16 records in the 100m and 200m last year and has continued to impress ever since. Ahmad has since improved his personal best in the 100m to 10.76 seconds and has a personal best of 21.73seconds in the 200m. Ahmad subsequently travelled to Jamaica earlier this year to train under Usain Bolt’s coach Glenn Mills and will be looking to apply that knowledge in his future races. Ahmad has a very good chance of winning a Youth Olympics spot in Bangkok with the top 8 athletes earning the quota. Ahmed though will have a tougher task in the 200m with only four quota spots available.

Women athletes in particular will be having their task cut out with only 32 quota places up for grabs (as compared to the 57 spots for the men). Junior Federation Cup winner Deepanshi Singh of Uttar Pradesh will have to improve on her 7th place finish at the Junior Asian Championships if she is to qualify for the Youth Olympics with just one quota spot in the women’s long jump competition.

Also looking forward to improving on her performance at Gifu will be 3000m  runner Seema Kumari. The Uttar Pradesh athlete came second at the Junior Federation Cup with a time of 9:51.04 seconds but only managed a fifth place finish in Japan with a time of 10.12.33 seconds. She will want to get closer to her timing from April with just the top 3 athletes qualifying for the Buenos Aires Games.