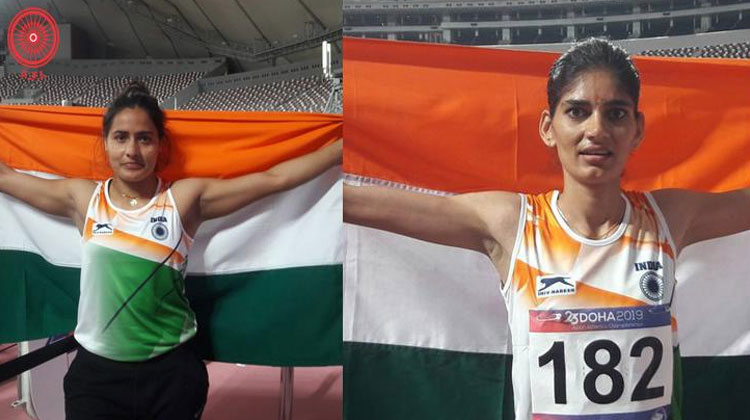 Doha, April 21: Annu Rani claimed the women’s javelin throw silver medal in the 23rd Asian Athletics Championships with a throw of 60.22m at the Khalifa Stadium here today. Distance runner Parul Chaudhary had opened India’s medal hunt with a bronze in the women’s 5000m, slipping past a tiring compatriot Sanjivani Jadhav in the final lap of the gruelling race.

Parul Chaudhary settled to a comfortable pace, unmindful of the leading trio pulling away midway through the race and, drawing on her experience of running marathons to gain ground on Sanjivani Jadhav steadily. She finished with her personal best of 15:36.03, a significant improvement on the 15:58.35 she clocked in Patiala last month.

“I did not worry about the leaders stepping up the pace. I ran according to plan and how my body felt,” the 24-year-old Parul Chaudhary said. Sanjivani Jadhav’s 15:41.12 was her season’s best. She was disappointed at not been able to shadow the Bahrain runners Winfred Mutile Yavi and Bontu Rebitu till the finish.

Annu Rani focused on doing well in the competition, not letting her mind go back to the time she threw a disappointing 53.93m in the Asian Games in Jakarta. Her opening throw went past the 60m mark even though she was conservative in throwing from well behind the line. It was good enough to get silver tonight. Her team-mate Sharmila Kumari was seventh with a best of 54.48m.

“I was keen on doing well this evening. I knew I had trained well for the event,” Annu Rani, 26, said. Her second throw of 58.86m and a fourth of 56.56m would have got her silver. “I was pumped up and would have got my career best today had I not thrown from far behind the line.”

China’s Lyu Huihui set a new Championship record with her opening throw of 64.92 and raised it to 65.83m to be a clear winner of gold medal.

The two medals came as a boost to the Indian contingent that was downcast after Hima Das pulled with a back injury halfway through her 400m heats in the morning. The young Indian slowed down near the 180m mark and then clutched her lower back as she felt pain due to spasms. She then lay sprawled on the track as the other runners sped away.

The morning session also had some wonderful news for India as Dutee Chand clocked a National record time of 11.28 seconds in the women’s 100m dash, MR Poovamma came up with a season’s best time of 52.46 seconds in finishing second in her 400m semifinal heats behind title favourite Salwa Naser (Bahrain).

In the two-lap race, Gomathi Marimuthu ensured that there would be an Indian representation in the final as she came home in 2:04.96 in the fast first semifinal heats. Twinkle Chaudhary made a game attempt to catch up with the leaders by straining every sinew in the second semifinal heats but finished fourth in 2:07.00 and missed a berth in the final.

India’s men’s 400m and 800m runners advanced to the semifinals as well. Arokia Rajiv won his first round heats in 46.25 seconds while Muhammad Anas Yahiya did enough to finish third in his heats in 46.36 seconds and assure himself of a semifinal spot. Jinson Johnson (1:53.43) and Mohammed Afsal (1:52.93) advanced to the 800m semifinals.