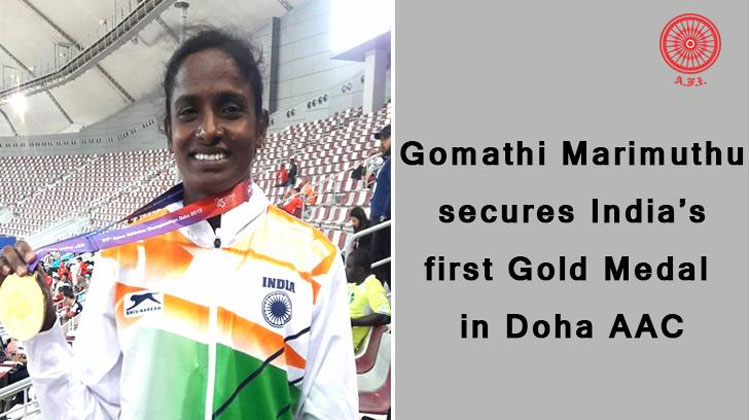 Doha, April 22: Gomathi Marimuthu scripted an amazing story and made a dream come true by winning the women’s 800m gold at the Asian Athletics Championships at the Khalifa Stadium here on Monday. It was India’s first gold medal after three silver, including for javelin thrower Shivpal Singh, and five bronze medals.

Gomathi clocked a personal best of 2:02.70 with a gallant run over the final lap after being pushed to sixth place just after the bell. On the back straight, she went past a pair of Sri Lankan runners and moved to third place with 200m left. Running on the outside, the 30-year-old could sense Kazakhstan’s Margarita Mukasheva and the leader Wang Chunyu losing pace. And she willed herself to sustain her charge till the gold was won.

This was third time lucky for Gomathi, who had finished seventh in the Asian Championship in 2013 and fourth in 2015. She had to come through a confirmatory trial in Patiala where she was paced by quartermiler MR Poovamma. She did not need such support on the track this time as she drew from the energy and intensity to deliver a good performance.

Shivpal Singh also came up with a personal best of 86.23m with his second throw to secure the silver medal behind Chinese Taipei’s Chao-Tsun Cheng who fouled his first throw but flung the spear over a championship record distance of 86.72m. After a third throw of 83.46m, he preferred to pass the other throws fearing an adductor injury.

Shivpal Singh, who opened with 80.89m, had another throw over 81.39m and try as he might, could not dislodge the Chinese Taipei champion from the pedestal. He had the consolation of going past compatriot Neeraj Chopra’s meet mark of 85.23m set with his very last throw in Bhubaneshwar in 2017.

The 400m hurdlers Saritaben Gayakwad and MP Jabir each gave India a bronze medal from the women and men’s races. Both had to overcome the challenge of moving up from the lower positions to the podim. Saritaben Gayakwad clocked 57.22, a shade below her season’s best, while Jabir produced a personal best time of 49.13 seconds.

On Sunday night, the men’s 3000m steeplechase saw Avinash Sable produce a dramatic finish by passing two runners at the final water jump and the final hurdle to secure a creditable silver medal on international debut. His time of 8:30.19 was not far off the National record of 8:28.94 that he set in Patiala last month.

MR Poovamma had to settle for a bronze in the women’s 400m after a photo-finish was used to separate her from the silver medallist Elina Mikhina (Kazakhstan). The race was won with comfort by Salwa Naser of Bahrain. Poovamma clocked 53.21 seconds and her bronze medal was some consolation for India after Hima Das pulled up injured in the semifinal heats.

Gavit Murli Kumar completed India’s five-medal hunt on the opening night when he won bronze in the men’s 10000m to add to the silver that Annu Rani claimed in the women’s javelin throw and the bronze that Parul Chaudhary got by beating compatriot Sanjivani Jadhav on the final straight.