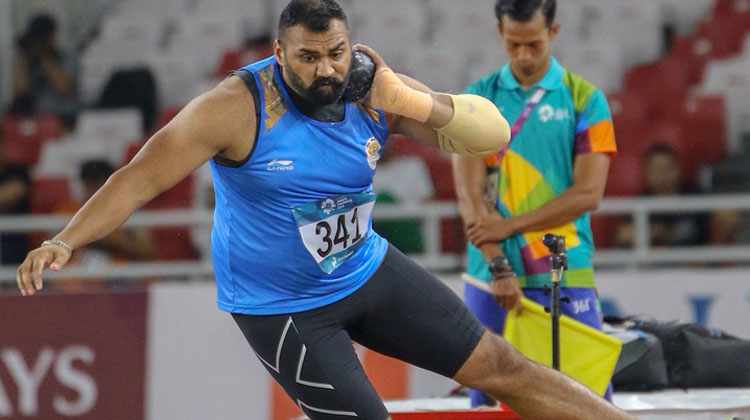 The national record, which previously belonged to Om Prakash Karhana with 20.69 metres was shattered by the left-handed Toor on his fifth attempt. Tajinder had earlier taken the lead with his first attempt of 19.96 metres.

His personal best was 20.40 metres which he had set at the Federation Cup in Patiala in 2017, but there was no stopping Tajinder here as he managed a 20 metre throw in his sixth and final attempt.

He was joined in celebration by his coach Mohinder Singh Dhillon as shot put gave India its ninth gold at the Asiad, making it the most successful discipline for India. Men’s Shot Put has now contributed 19 medals in total, including 3 silver and 7 bronze medals.

Hima broke the record of Manjeet Kaur, set in 2004 by 0.05 seconds. Joining Hima in the semi-finals of the 400 metres was Nirmala Sheoran, who also won her Heat, the third, with a time of 54.09 seconds.

The male quarter-milers also did not disappoint as Muhammad Anas, who came fourth in the Commonwealth Games, won the second semi-final with a time of 45.30 seconds, making him the fastest qualifier.

Arokia Rajiv, who won a bronze in Incheon 4 years ago, was second fastest in the 1st semi-final with a time of 46.08 seconds. Earlier, Anas had won his Heat in the morning, running 45.63 seconds. Arokia had run 46.82 seconds in Heat 4.

Dutee Chand also won her 100 metres Heat with a time of 11.38 seconds, holding off the challenge of Olga Safronova. Chand qualified third fastest overall and will now run in the first semi-final.

Sreeshankar Murali, in his first major international competition, also did well in the Long Jump qualifiers, managing 7.83 metres in his first jump. That attempt was enough for the 19-year old Federation Cup champion to cross the automatic qualification mark of 7.80 seconds and qualify for the final.

Balasubramanya Chethan, India’s entrant in the High Jump competition, did not disappoint, as he cleared 2.15 metres on his second attempt at the height to book a place in the final.

Sarita Singh finished fifth in the Women’s Hammer Throw, with a best attempt of 62.03 metres on her third throw. It was a good performance by the national record holder in a highly competitive field.