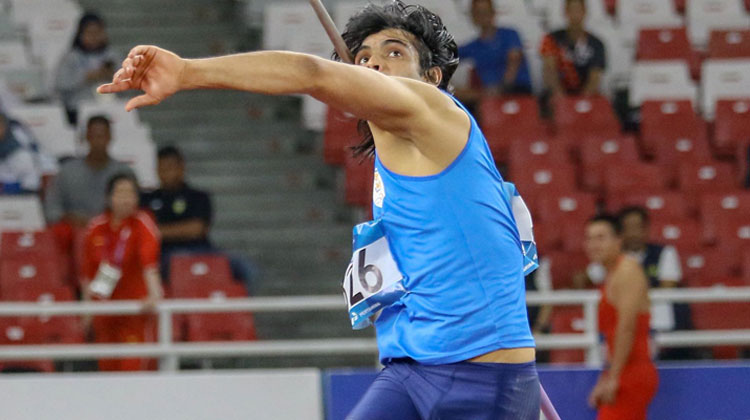 The thrower from Haryana, in the process also broke his own national record of 87.43, managing an attempt of 88.06 metres. He finished well ahead of the rest of the field, as the silver medallist Liu Qizhen was far behind with a best throw of 82.22.

Chopra also managed another 85-plus throw, with an attempt of 86.36 metres on his fifth throw. Shivpal Singh of India, also in the final, finished with a best attempt of 74.11 metres, ending in eighth position.

There was another national record for India as Dharun Ayyasamy ran a blistering race to win the silver medal in the 400 metre hurdles. Dharun, the 21-year-old was fast in the final section and finished with a time of 48.96 seconds. It was Dharun who had broken Joseph Abraham’s 2007 record at the 2018 Federation Cup, managing a time of 49.45 seconds in Patiala. Santosh Kumar Tamilarasan finished in a time of 49.66 seconds, ending in fifth position.

Sudha Singh managed to add a silver in the 3000 metres steeplechase to the gold that she won in Guangzhou in 2010. Singh finished the race in 9 minutes and 40.03 seconds, behind winner Yavi Winfred of Bahrain. Chinta finished 11th.

Neena Varakil made it three silvers for team India tonight, with a best attempt of 6.51 metres. She also managed a jump of 6.50 metres. Nayana James came tenth, finishing with a jump of 6.14 metres.

Jinson Johnson came first in 800 metres qualifying as he finished 1 minute and 47.39 seconds. Manjit Singh also qualified for the finals finishing eight in overall standings with the time of 1 minute and 48.64 seconds.