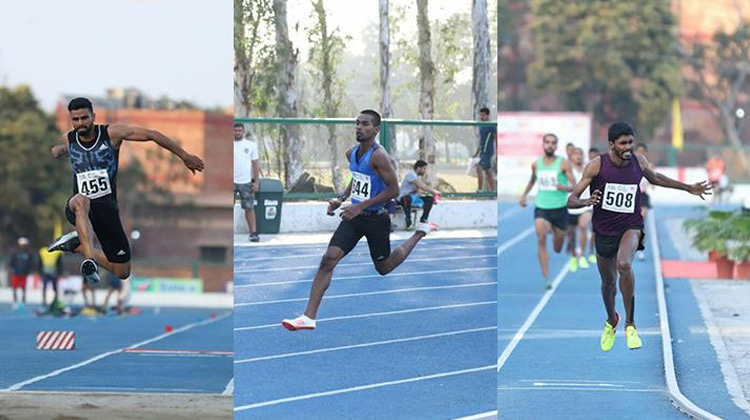 Patiala. Dharun Ayyasamy of Tamil Nadu delivered the performance of his career as he shattered the 11-year old national record in the men’s 400m hurdles at the Run Adam Federation Cup at the National Institute of Sport in Patiala on Thursday.

Ayyasamy, who was part of the Indian 4x400m relay team at the Rio Olympics, crossed the finish line in the hurdles event in 49.45 seconds to erase the old mark of 49.51 seconds set by Joseph Abraham in Osaka in 2007.

The time Ayyasamy clocked was immediately significant for it was matched the qualifying guidelines of 49.45 seconds set by the AFI to determine the Indian team for the Commonwealth Games at Gold Coast.

Ayyasamy’s performance was all the more impressive for it came with the athlete still recovering from a serious illness. “I am really happy with the result,” Ayyasamy said after the win. “I was suffering from typhoid till ten days before of IGP. But i have worked hard with my coach to recover and train. It is a very good feeling to break national record and qualify for CWG,” he said. Ayyasamy finished ahead of statemates T Santosh Kumar (50.14seconds) and M Ramachandran (51.61 seconds).

Arpinder Singh, earned the right to improve on the bronze medal he won in the triple jump at the Glasgow Games in 2014 by clearing 16.61m to finish 1 cm above the qualifying guidelines of 16.60m set by the AFI. Arpinder was in danger of finishing outside the qualification guidelines but managed to find the mark in his fifth jump which was also his final legal jump of the competition.

Hima Das of Assam, who had already qualified in the women’s 400m race earlier, blitzed the field in the 200m event winning in a credible time of 23.37seconds which was just.07 seconds shy of the meet record of 23.30 set by PT Usha in 1998. Although Das also missed the CWG qualifying guidelines of 22.60 seconds, it was a credible performance by the 18 year old who finished more than a second clear of second place PJ Sneha (24.47 seconds).

Another strong performance that fell short of the CWG qualifying guidelines came in the 1500m through Jinson Johnson. Johnson clocked 3.39:69 seconds that was just .19 seconds shy of the qualifying guidelines of3:39:50 seconds. Johnsons mark was also a new meet record, erasing the old mark of 3:41:12 seconds recorded 11 years ago by Chatholi Hamza. Johnson finished ahead of Manjit Singh and Bir Singh who clocked 3:42:24 seconds and 3:42:28 seconds respectively.