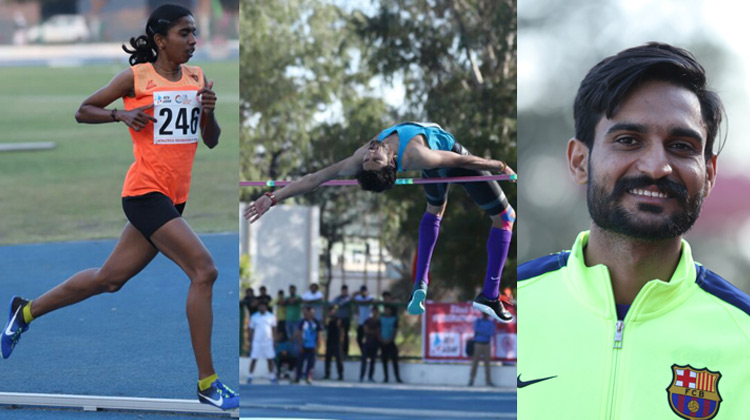 Patiala. 19-year-old Tejaswin Shankar set a new national record in the men’s high jump jumping 2.28m at the Run Adam Federation Cup in Patiala on Wednesday. Shankar had earlier cleared 2.28m at a collegiate event in the USA but this mark was his first at an Athletics Federation of India event. Shankar also held the old national record of 2.26m recorded at the Junior National Championships in 2016.

In his path to clearing the national record, Shankar also cleared the qualification guideline of 2.25m set by the Athletics Federation of India for entry to the Commonwealth Games athletics squad. Beginning his jumps at the 2.10 mark, Shankar flubbed his first jump at 2.10m but improved steadily to cross 2.14m, 2.18m, 2.25m and finally 2.28m on his very first attempt. He then improved the height to 2.31m and although he came within a few centimetres of clearing the height failed in his three attempts.

“I had jumped this height in the USA but it feels good to clear this height at a competition in India,” said Shankar, a first-year student of Kansas State University. “I need to get more consistent. I hope I will clear the 2.31m at the Commonwealth Games,” said Shankar.

But while all eyes were on Shankar, Siddharth Yadav delivered the performance of his career to also clear 2.25m and finish with silver. “It is the best jump of my career. My previous best was 2.23m,” said the 25-year-old Yadav who made three failed attempts of 2.28m.

Shankar and Yadav delivered by far the best performances of the day. They were not the only athletes to qualify for the Commonwealth Games though. L Suriya also made the cutoff mark in the women’s 10000 race by clocking 32:23:96 seconds. The qualifying guideline was set at 32:30:00 seconds. Suriya had won the 5000m at the Federation Cup earlier, yet had not pushed herself too hard then. “We had focused all her efforts for the 10000m because we felt that she had a better chance in the 10000m,”said Suriya’s coach Surender Singh.

Of the other athletes in the competition, only pole vaulter P Surekha came close to matching the qualifying guideline for the Commonwealth Games. Surekha, who held the meet record of 4.05m and the national record of 4.15m, managed to clear 3.90m, to finish 10cm shy of the CWG qualifying guideline of 4.00m. She finished ahead of Khyati Vakharia who jumped 3.80m and Krishna Rachan who cleared 3.70m.

Anu Rani who needed to exceed her personal best of 61.80m in order to match the qualifying guideline of 62m set by the AFI for the Commonwealth Games, could only manage a best of 57.37m on the day. Rani, threw her best effort in her very first attempt but faltered consistently after that, fouling her final two throws. Pushpa Jhakar of Haryana finished second with 53.70m while Sharmila Kumari finished third with 53.53 seconds.

The athletes will now have to pin their hopes on the decision taken by the AFI selection committee that will sit on Wednesday.