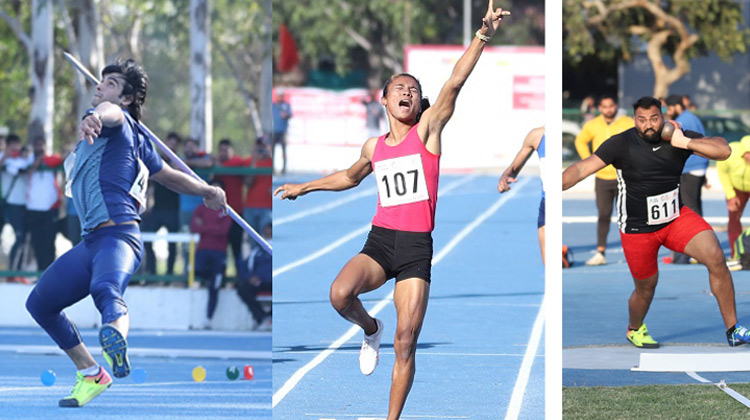 Patiala. Neeraj Chopra reemphasized his position as the best javelin thrower in the country even as he won a gold medal at the Run Adam Federation Cup Senior National Athletics Championships 2018 by setting a new meet record.

In his final throw of the competition, Chopra threw the spear 85.94m, erasing the old mark of 85.63m, recorded at the same venue last year. Chopra who had already matched the AFI’s qualifying guidelines of 81.80m at the Indian Grand Prix last month, recorded what was the second best performance of his career and the best throw ever recorded on Indian soil. “Although I had already qualified for the CWG, I wanted to make a mark at the Federation Cup. That is why I was trying so hard. I will look to improve on this at the Commonwealth Games,” Neeraj said.

While Chopra had already qualified for the CWG, the Federation Cup was meant as the final opportunity for athletes to book their spots in the Indian squad. Two athletes made the most of the opportunity.

Hima Das, who turned 18 last month is primarily a 100 and 200m runner and was in fine form in the latter having won gold at the Asian Games Test event. However she was competing in the 400m and stunned the Federation Cup field in what was her debut competition in the quarter mile. Das clocked 51.97m to finish inside the CWG qualifying guidelines of 52 seconds set by the Athletics Federation of India. “I was expecting to do around 52 seconds. So when I saw that I was able to go inside 52 seconds I was very happy. I was not sure how I would run the 400m but I was able to run without any difficulty,” Das said after finishing more than a second ahead of second place GK Vijaykumari who clocked 53.03 seconds.

Shot putter Tejinder Pal Toor was the other athlete to exceed the AFI’s qualifying guidelines. Toor, who won a silver at the Asian Indoor games in January, needed just one throw to better the AFI’s qualifying guideline of 20.20m, by hurling the iron sphere 20.24m. For Toor, it was a satisfying return to the ground on which he had thrown a personal best of 20.40m last season. Back then Toor had been in the race to qualify for the 2017 World Championships but had fallen short by 10 centimetres. Despite his performance on Tuesday, Toor was not satisfied with his performance. “My goal was to throw over 21 meters. I could not do it here but I will try to do it in the Commonwealth Games,” he said.

There were other strong performances on the day too, most impressive of which was long jumper M Sreeshankar, who leaped into the junior record books with a jump of 7.99m. Although the 18-year-old Sreeshankar took the gold medal, he fell just 1 cm short of the AFI qualifying standard mark of 8.00m set for his event.

Although he fell short of the qualifying guideline of 10.16m, Siva Kumar of Tamil Nadu, marked himself as a sprinter to watch out for as he stunned a 100m field that included National Record holder Amiya Mallick and Asian Indoor bronze medalist Elakkiya Dasan to win a maiden national gold medal with a time of 10.43 seconds. Elakkiya Dasan was second with 10.56 seconds while Sanjeet of Haryana was third with a time of 10.59 seconds.