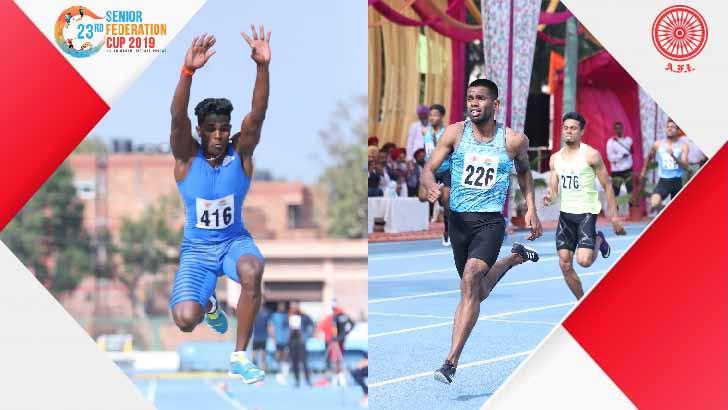 PATIALA.The 23rd Federation Cup lived up to its billing on the second day of competition with eight athletes meeting the qualifying guidelines set by the Athletics Federation of India for the Asian Athletics Championships 2019.

Amidst several performances of note, DharunAyyasamy managed to stand out as he shattered the national record in the men’s 400m hurdles at the National Institute of Sports in Patiala. Ayyasamy clocked a time of 48.80 seconds to erase the old national mark of 48.96 that he himself had recorded at the 2018 Asian Games. Ayyasamy’s effort was more than enough to meet the qualification standard of 50.00 for the Asian Championships set by the Athletics Federation of India.

“I can go even faster. My goal is to record a time of 48.50. Maybe I will do it at the Asian Championships,” said Ayyasamy after the race. Ayyasamy finished far ahead of the field with Kerala’s MP Jabir clocking a time of 49.53 seconds to claim the silver medal. Jabir though would be satisfied at having met the AFI’s qualifying guidelines. M Ramchandran of Tamil Nadu took the bronze medal with a time of 50.57.

Two athletes would meet the AFI guidelines in the women’s version of the 400m hurdles. SaritabenGayakwad of Gujarat would set a new meet record in the race, winning with a time of 57.21. The previous meet record of 57.39 stood in the name of Anu Raghvan who had recorded that mark in the 2017 edition of the tournament. Arpitha M of Karnataka followed closely behind Gayakwad, stopping the clock at 57.45. With the qualifying guideline standing at 57.50, both athletes booked their ticket to Doha. JaunaMurmu would have to be satisfied with the bronze medal with her time of 57.58.

Another two runners – GomathiMarimuthu of Tamil Nadu and Twinkle Chaudhary of Punjab — would meet the AFI guideline in the women’s 800m. Marimuthu clocked a time of 2.03.21 while Chaudhary followed with a time of 2.03.67. Both times were well under the qualification standard of 2.05.00.

A surprise was in store in the men’s triple jump competition with Youth Olympics bronze medalist Praveen Chitravel upsetting Asian Games gold medalistArpinder Singh. Chitravel recorded a personal best jump of 16.51m to both claim the gold medal and also qualify for the Asian Championships. Chitravel came close to the Asian Games guideline of 16.50m with his second jump of 16.47m. He cleared the guideline with his third effort which stood at 16.51m.

While Chitravel claimed his first gold medal at the Federation Cup, Arpinder Singh finished outside the medal bracket. Singh who was training in Chula Vista, California, finished in fourth place with a best jump of 16.34m. He was beaten to a place on the podium by Mohammad Zuber of Uttar Pradesh and Mohammad Salahuddin of Tamil Nadu. While Zuber had a best jump of 16.38m, Salahuddin pipped Arpinder by recording a jump of 16.36m.

While jumps were not of the highest standard in the men’s triple jump, the men’s javelin throw saw several throws of the highest quality. The competition was won by Shivpal Singh who recorded a best effort of 82.56m. He was followed by Vipin Kasana who threw the spear a distance of 81.23m. While Singh had already qualified for the Asian Championships with a throw of 81.48m in the qualifying round, Kasana staked his claim to a ticket to Doha with his throw which exceded the AFI qualification standard of 80.75m. While they may have fallen short of the AFI guideline, three other throwers made creditable throws of 79m. Rajender Singh claimed bronze with an effort of 79.75m while Abhishek Singh and Davinder Singh Kang followed behind with throws of 79.46m and 79.31m respectively.